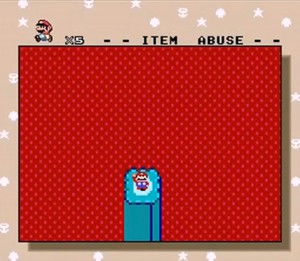 This has got to be one of the craziest Super Mario World levels that anyone has ever seen! It is pretty fun to watch. There is no way that any human being could actually play this level without messing up somewhere down the line. I couldn’t even pull off the first parts after a couple thousand tries I’m sure. Pretty cool, none the less!

Don’t mind the music-break after the non-scrolling castle; penangbenny forgot to add that in until after I was done, and I was not about to re-do everything. Also, even though it says it’s version 1.3, there is no big difference in the actual level (really, the main difference is that 1.7 has one or two different backgrounds, and a few more spike-walls to not allow some walljumps I made in the TAS.)

A few words from the hack creator, if you want to read them:

This ROMhack was inspired by MoltovMarioWorld’s Pit of Despair

This ROMhack level was mostly made to show Super Mario World pushed to its absolute limits requiring just basically every single glitch in the game and BEYOND. I have also made a TAS of my own H***hole, and will post it probably in May.

If you are insane enough to play it, the link is below:

Oh yeah, forgot to explain what TASes are. Might as well copypasta a bit now.

TASes are recordings of games “formed by constructing an input file slowly over time using an emulator as a tool to overcome human limitations such as skill and reflex, then playing the file back to give the impression that the game is played extraordinarily.” Tools such as savestates and slowdown are used extensively to produce superhuman play.

I don’t even remember putting the category to “Gaming”…