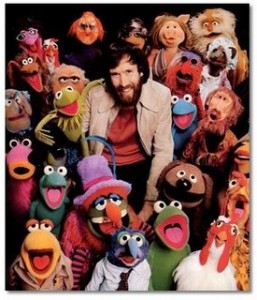 The Muppets began life as a variety show and, as such, music has always played a large role in their existence. Whether it was original songs or them reinterpreting existing material, they always brought something fresh and different to the proceedings. Here now, are The Muppets 10 Best Musical Moments.

Oh, and just to make things interesting I’m not including anything from the actual Muppet Movie. If I didn’t disqualify it, this would quickly devolve into nothing more than a listing of that film’s soundtrack.

The song/sketch has been used many times over the years. And aside from Rainbow Connection (which, as mentioned above, is disqualified from this list) there is probably no song more associated with The Muppets.

#9 – Halfway Down The Stairs

It began life as a poem by A.A. Milne (you know, the Winnie The Pooh guy). It’s been recorded by the likes of Gene Kelly and Evanescence’s Amy Lee. But The Muppets chose Kermit’s nephew Robin to sing it on the show (though it was once covered by Rowlf The Dog). It’s a maudlin little piece of ennui but it still manages to resonate because every child has felt like this at some point in his or her life.

While today we know Alice Cooper as a Jesus-loving, right-of-center, golf aficionado. But there was a time when he was downright scary. Granted, that time was from February 1978 until November 1978 but still, he was scary. And his appearance on The Muppet Show just happened to fall within the acceptable window of scariness. Whew! In modern terms that would be like Marilyn Manson popping up on the Teletubbies. Ok, that’s not really “modern terms”. That’s more like “1997 terms”. But you get the point – edgy stuff for a kids show. And just to make things even edgier, his version of school’s out ends with them blowing up the school, being buried in the debris and then rising from the ashes with Alice chewing on a bone. In retrospect, he might be singlehandedly responsible for Columbine.

When did America start to realize that they missed The Muppets? Easy. November of 2009 when they released their version of Bohemian Rhapsody. It features appearances by virtually every major Muppet. It includes a brilliant call back to Mahna Mahna and, if that’s not cool enough for you, they’re using the original musical tracks so it is literally The Muppets and Queen performing. It racked up 10 million Youtube views in its first week alone and, as of this writing, sits at almost 24 million.

Some of The Muppets greatest musical moments came from their reinterpretation of songs and their ability to place them into a new context. Here they take on the Buffalo Springfield anti-war classic For What It’s Worth and turn it into a parable about the dangers of hunting and urban sprawl. It might even be preachy if it weren’t so good.

There is no middle ground on the Harry Nilson song Coconut. It’s an earworm of the highest magnitude. It’s a ridiculously catchy melody with a repetitive chorus and, on an interesting side note, there isn’t one chord change in the whole damn thing. The entire song is C7 strummed on an acoustic guitar. Teach yourself that one chord and you can now add “Guitar Player” to your resume. You’re welcome. This time out The Muppets take the song literally…at first. The number opens with Kermit in a hospital bed. However, his complaint is not a “stomach ache” but a “flipper ache”. As his fever begins to take hold, his room morphs into a wild jungle and his physician transforms to a witch-doctor before his very eyes. It’s cleverly crafted deconstruction of socialized medicine in the guise of a children’s show.
I’m totally kidding. It’s just a silly Muppet sketch.

Ms. Piggy gets the spotlight on this number and she deserves it. Don’t believe me? Just ask her. It’s an insanely catchy song in the spirit of ‘60s era girl groups. And, in case that’s not enough, I’ve got two words for you: Muppet Babies. Historians will long debate whether Muppet Babies were good or bad. Sure, it’s a direct breach of Muppet Universe continuity. After all, anyone who’s seen The Muppet Movie knows that Kermit was born and raised in a swamp and didn’t leave until he was an adult. We saw him meet all of these characters for the first time in that film. So how are they now all in a nursery together? Granted, it’s positioned here as a “What If” but that doesn’t explain the cartoon series. But you know what? Screw it…it’s just too damn adorable.

At first glance this might not look like an “official” Muppet song. Granted, it’s from The Jim Henson Company and the song is even written by Paul Williams (who wrote all of the songs for The Muppet Movie). But there are no Muppets associated with The Muppet Show proper. However, this charming Christmas special was once narrated by none other than Kermit The Frog. However, when Disney acquired the rights to The Muppets they did not deem Emmet Otter et al worthy for inclusion in the deal. So Kermit had to be excised from all future airings and/or home video releases. But he was once there which means they count as Muppets.

It’s always nice to see the “core” Muppets in one number together and here they are at their best. And you get John Denver too. I’ll let you form your own opinion as to whether or not that’s a good thing. Each Muppet is given a wonderfully “in-character” bit of business to do for their line of the song. Whether it’s Fozzie forgetting when to come in or Ms. Piggy’s increasingly narcissistic performance of “Five Gold Rings” it all just works.

Not counting Rainbow Connection, this is Kermit’s signature song. So how about a version where he doesn’t sing it? Why? Well, um…because he’s dead. Or, more accurately, because Jim Henson is dead.

This is taken from the Jim Henson Memorial. Here’s an interesting piece of trivia: Henson’s memorial was open to the public with one interesting stipulation: no one was allowed to wear black. Even in death the guy was awesome.

The setting is St. John’s Cathedral of the Devine in New York City. It’s a striking image as Big Bird steps down from the altar and onto a stage that extends into the audience. It’s hauntingly wordless as he takes his position. The music begins and he starts to sing It’s Not Easy Being Green. The ironic juxtaposition of this colossal mass of “yellow” singing about being “green” is almost comical…until you realize that he’s singing it because the green guy can’t. Are you crying yet? Yeah, um, me neither.

As Big Bird fights his way through the song only Kermit was meant to sing, his voice fluctuates and cracks, trying desperately to keep it together. Crying now? Don’t worry about me. I’m good. It’s just a little dusty in here. That’s all.

He almost loses at “Why wonder? Why wonder?” but he pulls it together and finishes; eyes down, head bowed. It has to be the most gut wrenching performance ever given by a Muppet. But I made it through without crying.

Then he looks up to the sky, says “Thank you, Kermit” and he walks off stage in complete and utter silence.
Damn you, Big Bird.