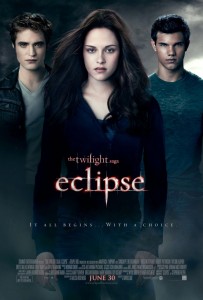 I’ve said many times how I’ve read the Twilight series, and just couldn’t get into them. Although, after reading them I thought the third book would make for the best adaptation. If the new trailer for Eclipse is any indication, then it looks like I’m right. This one looks to be the most action packed of the series, and sets it up for its slightly ludicrous final showdown in Breaking Dawn.

The special effects still look a bit cheesy, but I’m sure the many boyfriends who will be dragged to see this film won’t mind a bit of bad CG, as long as there is action. The trailer gets a bigger thumbs up from me than New Moon, which shamelessly exploited the fact there would be a shirtless Taylor Lautner. This time they decided to go a bit more tame, and I appreciate it.