Vote For Will Ferrell and Mark Wahlberg to Visit St. Louis! We Are In The Top 5 In The Nation! 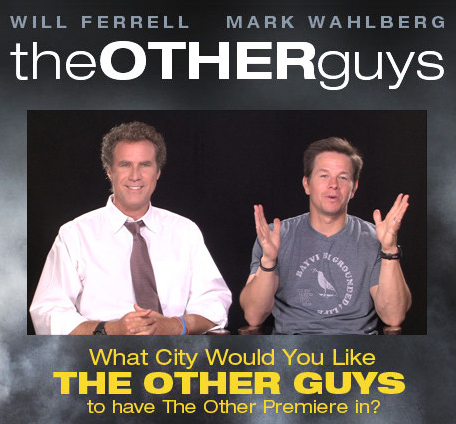 Lately it seems like St. Louis is on a hot streak when it comes to winning movie competitions. Maybe this is a sign that the community is more actively involved in the arts, which is exactly what we like to see!

Currently, St. Louis is in the top 5 in the nation to win a premiere of Will Farrel and Mark Wahlberg’s latest movie, “The Other Guys.” In order to secure the top spot, and a premiere that involves both of the actors, we need everyone to vote!

Everyone is allowed to vote one time per day, so make sure you do it! All you have to do is go to The Other Guys on Facebook and allow their app to connect to your profile. Once you do that, you can go to the poll and vote daily. It’s that simple! Make sure to vote every day, and bring Will Farrell and Mark Wahlberg to St. Louis!

Here is a video from Farrell and Wahlberg, talking about the contest:

More about the contest:

CULVER CITY, Calif., July 14, 2010 – In anticipation of the nationwide release of Columbia Pictures’ The Other Guys, starring Will Ferrell and Mark Wahlberg, in theaters August 6th, the film will make its World Premiere in New York City on August 2nd. But the fun won’t stop there.

The movie will have another premiere — “The Other Premiere” — and moviegoers can help decide where it will be. Beginning today, moviegoers can go on Facebook at www.facebook.com/otherguysmovie and vote in a poll to decide which Other City will host The Other Premiere. Ferrell and Wahlberg will attend the red carpet event in the winning city on August 5th.

Commenting on the announcement, Adam McKay, director of The Other Guys, said, “We’ve all had those moments when we’ve had to watch some other guy be the cool guy. But your city can be the cool city. Get on Facebook and vote, and we’ll bring The Other Premiere to you.”

In The Other Guys, NYPD Detectives Christopher Danson and P.K. Highsmith (Dwayne Johnson and Samuel L. Jackson) are the baddest and most beloved cops in New York City. They don’t get tattoos – other men get tattoos of them. Two desks over and one back, sit Detectives Allen Gamble (Will Ferrell) and Terry Hoitz (Mark Wahlberg). You’ve seen them in the background of photos of Danson and Highsmith, out of focus and eyes closed. They’re not heroes – they’re “the Other Guys.”

But every cop has his or her day and soon Gamble and Hoitz stumble into a seemingly innocuous case no other detective wants to touch that could turn into New York City’s biggest crime. It’s the opportunity of their lives, but do these guys have the right stuff?