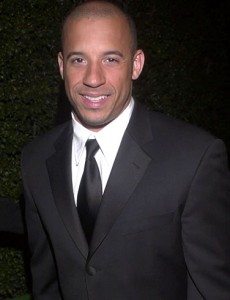 Vin Diesel posted a couple updates on his Facebook page recently pertaining to the two sequel films he is doing, a Fast and Furious sequel titled Fast Five, and an unnamed sequel to his sci-fi series, Chronicle of Riddick.

Had a meeting with Justin Lin today regarding the Fast saga… some daring but fascinating thoughts in terms of action set pieces… and relationships, old and new.

The team is on their way to Brazil this evening, to scout, and to see what selection of cars there are.

Will be talking to DT (David Twohy, director of the Riddick film) next week, maybe he can let me show some concept art of Riddick…

Heard from DT over the weekend. He is very excited about how well Europe went, and is delivering the next draft of the Riddick script this month. Nice.

I’m sure many of you are just as surprised as I am that not only can Diesel read, but he knows how to write as well. Maybe I should have put this in the headline. I kid of course, the sequels should make for some quality entertainment.