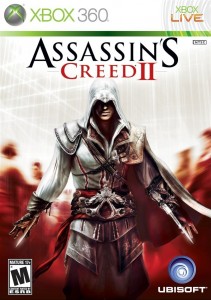 Assassin’s Creed 2 improves greatly on the first game of the series (which was solid on its own, repetition and all), proving that listening to an audience’s complaints can be more than beneficial. By doing so, there is no question that this is one of the best games of 2009.

This sequel picks up right where the first ends. Desmond Miles is broken out of the Templar run Abstergo Industries by the recently revealed assassin, Lucy Stillman, and they escape to an assassin hideout. Here he is introduced to two more assassins, who round out the team that hopes to get Desmond back into their own Animus so he can relive the memories of another ancestor, Ezio Auditore. On the simplest level, Ezio’s story is one of revenge following the deaths of his father and brothers. However, it doesn’t take long for his story to interweave with that of the Templar’s during the Italian Renaissance as they search for other Pieces of Eden.

Other than finding the other Pieces of Eden before the Templars do, another goal of Lucy’s team is to help Desmond become an assassin himself by learning the tricks of the trade from these memories. Luckily, this is a place where the player is one step ahead. The controls are just as easy to use as in the first game and take no time to master. Basically pick a path, start running, and Ezio will do the work for you. Sometimes he may latch on to something you weren’t quite aiming for while being chased, but then again, this is better than the few times (okay, numerous times) I got a little ahead of myself in excitement and didn’t follow the whole “look before you leap” mentality. But hey, once he peels himself off the ground, he’s back to climbing walls and jumping from rooftop to rooftop.

Similar to the free running controls, the combat controls are also similar to those of the first game and take far less time to acquire in-game this time around. There are your basic blocks, evasive maneuvers, counter attacks, etc., but now if your sword or duel hidden blades aren’t enough, you can vary it up by taking a weapon right out of the hands of your attacker. Not only is it entertaining to run someone through like a kabob with a their own spear, but this can be a really useful method when someone is trying to split you down the middle like a piece of firewood.

Other than the weaponry, there are a few more changes worth taking note of, thanks in large part to the use of money. Stronger weapons and armor can be bought at the blacksmith, the above-mentioned leap of faith onto the pavement can be remedied with medicine purchased from any number of doctors lining the street, clothes can be dyed if the classic white ensemble is too innocent for your tastes, and if you are feeling generous enough, a lot of money can be put into rebuilding the city in which your villa is found.

Thankfully, the biggest changes of them all are the changes made to the gameplay. The repetitious missions are still here, but they are now optional and don’t have to be completed in order to progress the main storyline. Just don’t get too sidetracked like I did the first time around because the time I spent searching for treasure, feathers and glyphs outweighed the time I spent going through the main plot points and I actually forgot a lot of the details of the main story. But don’t worry, if you are as forgetful as I am you can replay the game without saving over your first save file.

The Italian Renaissance is a nice change in locale for the series thanks in large part to the beautiful architectural styles of this time. It is obvious that a lot of time went into recreating this world, and it deserves more than the occasional glance when stalking soldiers on rooftops or escaping through the streets and bodies of water in the cities. Combining this with the character animations during the gameplay, Assassin’s Creed 2 really is a breathtaking game, even if sometimes the characters’ faces looked a little awkward during the cutscenes.

Assassin’s Creed 2 proves once again that the world of an assassin is a dangerous and exhilarating place to be, and I cannot wait to see what Ubisoft has planned next for the franchise.

Watch the trailer for Assassin’s Creed II Below: