Michael Bay has updated his blog to let us know about the new shooting locations, actors, and a new Autobot that we’ll see in the next film. 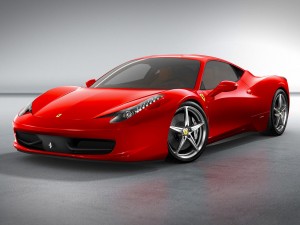 It actually has a bumper sticker that reads, "Suck it Megatron!"

Hey, it’s been a long time since I’ve posted. Just been a little busy.

Transformers 3 has been going very well. We are going to shoot in LA, Chicago, Washington DC, Florida, Texas, Africa, Moscow, and China. On the talent front, we just locked in Frances McDormand and John Malkovich. Both amazing actors I’ve always wanted to work with. We also just got Ken Jeong, he is the super funny actor stuck in the trunk from “Hangover” and the Doctor from “Knocked Up.”

We start shooting pre-shoots in about one month.

I also was at a Ferrari charity event this week raising money for a hospital being built by Ferrari in Haiti. I announced that night the newest Autobot to join Transformers: the Ferrari 458 Italia.

I also want to thank everyone on this site that donated to the Make -A-Wish charity. We raised $20,000 which I will personally be matching. This is a great charity where they make wishes come true for kids who are very ill. We have had many Kids from Make-A-Wish visit us on our Transformers sets and this time we will be posting video of their visits on Transformers 3.

It is nice to see him pick up some more veteran actors for the next film. Although, my problem with the last film wasn’t just with the acting. Most of the people in the film are capable actors, but they were written so over the top, with some dialogue that even George Lucas would scoff at.  I know the main attraction is the special effects, but I’d like a story around it that doesn’t make me cringe at how bad it is.

Oh well, at least we’ll get to see a cool Ferrari eh?