Movie Review: ‘Total Recall’ Will Alter Your Memories, For the Worse

When I was growing up, I watched three things: Teenage Mutant Ninja Turtles, Ghostbusters, and Arnold Schwarzenegger films. Anime? No thanks. Disney movies? Get that weak sauce out of here. 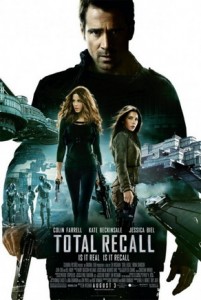 I grew up watching Arnold classics such as Terminator 2, Total Recall, and Predator. Really, what else was there? My parents didn’t mind the violence; they raised me right and I knew the difference between violence in movies and violence in real life.

When I heard they were re-making Total Recall, I received the news with mild trepidation. Part of me wanted to see how they’d re-imagine it, but another part of me feared they would completely FUBAR it.

I gotta learn to trust my gut.

In the latter stages of the 21st century, the majority of Earth is rendered uninhabitable by chemical warfare. There are only two spots on Earth that allow human life, England/Western Europe and Australia. Every day, workers from Australia must ride The Fall, an elevator that cuts through the core of Earth to reach England (don’t even get me started on the impossible physics of this).

Doug Quaid (Colin Farrell) is one of the workers who must make the journey each morning while his wife Lori (Kate Beckinsale) works in the police force. Quaid is bothered by a recurring dream in which he and a woman are fighting to escape from an unknown facility. After this dream begins to really get to him, he decides to head to Rekall, which promises to give the user whatever memories he or she desires. In the midst of his memory implantation, the process is halted when it is revealed that Quaid is a secret agent (it is said that a memory cannot be implanted if the memory already exists in the mind; thus, because he’s already a secret agent, he cannot have the memory of being one installed) and the police rush into arrest him. After subduing the police force, he heads home to find out that his wife isn’t actually his wife; Lori is a secret agent who was installed to track Quaid.

As it turns out, Quaid is actually Hauser, considered a terrorist by the government. The leader of the government forces, Cohaagen (Bryan Cranston), is secretly plotting fake terrorist attacks so he can authorize the creation of robotic police forces; with these robots, he plans on destroying the colony in Australia so he can rebuild it. Hauser is part of the resistance movement along with the mysterious woman, Melina (Jessica Biel), and Matthias (Bill Nighy), but a mission went awry and Hauser decided to have the false memory of “Quaid” installed so he could forget about his past.

Going purely by this description thus far, it would seem the film is at least somewhat faithful to the original, but it’s absolutely not the case. The original featured the landscape of Mars and its hostile atmosphere as one of the major plot points, but this is completely abandoned in the new edition. One of the most memorable moments of the first film, the three-breasted woman, does make a most welcome appearance, but given the dearth of other mutants or misshaped people, her presence sticks out as an anomaly, whereas in the original there were enough unique characters that seeing a woman with three boobs really wasn’t all that unusual. There is a plethora of other points that were part of the original movie that are either very different or completely absent in the new movie to the point that by the middle of the movie, it’s nearly impossible to recognize it as Total Recall.

The acting itself is ok, but it’s nothing to write home about. Biel and Beckinsale are adequate as Farrell’s love interests in the film, but they won’t be remembered for their performances. I found it somewhat odd, too, that despite the fact that the film takes place in the British empire, Farrell speaks with an American accent. Beckinsale displays her English accent; Farrell couldn’t be allowed to use his natural Irish inflection? Odd. I’d also hoped for an epic showdown between Beckinsale and Biel, as it was hinted at in the trailer and even in the movie, but it never really materializes.

I will give credit to the visuals; the special effects are excellent. The flying cars are done with a believable flourish. As far as the film’s atmosphere, though, it felt more like a page out of Blade Runner or the video game Deus Ex: Human Revolution than the original film. Heck, some elements seemed to be borrowed from Red Faction. Also, although a lot of the technology in the film are super advanced, firearms don’t seem to have aged one bit, as the government forces make heavy use of the futuristic-looking Kriss Vector, a new gun on the market that promises to all but eliminate recoil when fired.

You’ll note that many of my negative points about the film relate to the original. Indeed, had this been a stand-alone action film with no correlation to the original, I probably would have enjoyed it more. Some of my friends who went with me had never seen the original, and they liked it. Those of us who were fans of the Arnold-led first film, though, were less than impressed. If you are a huge fan of the original, I wouldn’t recommend this unless you’re absolutely dying to see Kaitlyn Leeb as the three-boobed woman.