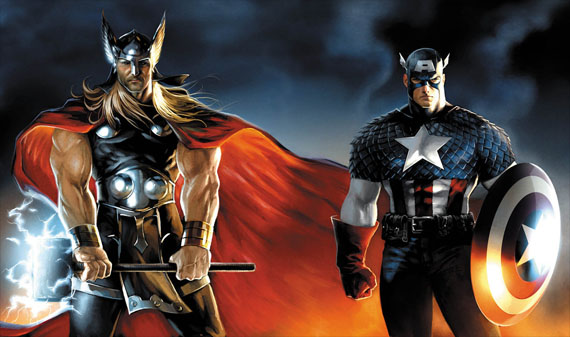 Is it just me or are superhero films counting their eggs before they hatch?  I thought it was ridiculous that the studio would green light a GREEN LANTERN sequel before it was even close to hitting theaters, but evedentally that is becoming the norm seeing that THOR and CAPTAIN AMERICA are both getting solo sequels.

I have not been a supporter of THOR at all.  But early reviews are standing behind the film.  Some reviews have even gone as far to say that the film is the best effort by Marvel Studios which I think is an extremely bold statement considering how good I thought IRON MAN was.  President of Marvel Studios Kevin Feige has recently confirmed that a sequel to THOR is coming after THE AVENGERS.  Sounds like a man completely confident in his product.

For me, CAPTAIN AMERICA has been completely different as far as anticipation goes.  I loved the casting choice of Chris Evans and actually really like Joe Johnston as a director.  Then I saw footage of the film, and it only confirmed my initial thoughts.  Now there is still a chance the film could be awful, but right now I think it looks the best of all the superhero films this summer.  Kevin Feige went on to say that the sequel to CAPTAIN AMERICA will be set in the present day.  This actually contradicts what the writers have said about the future of the film.

Like I said, talk about counting your eggs before they hatch.  I thought Marvel was smart in planning their lead up to THE AVENGERS, but not only could THOR and CAPTAIN AMERICA flop, THE AVENGERS could flop which could result in fans not wanting to see any of these heroes on the big screen for awhile.  I guess we will see how this all pans out.