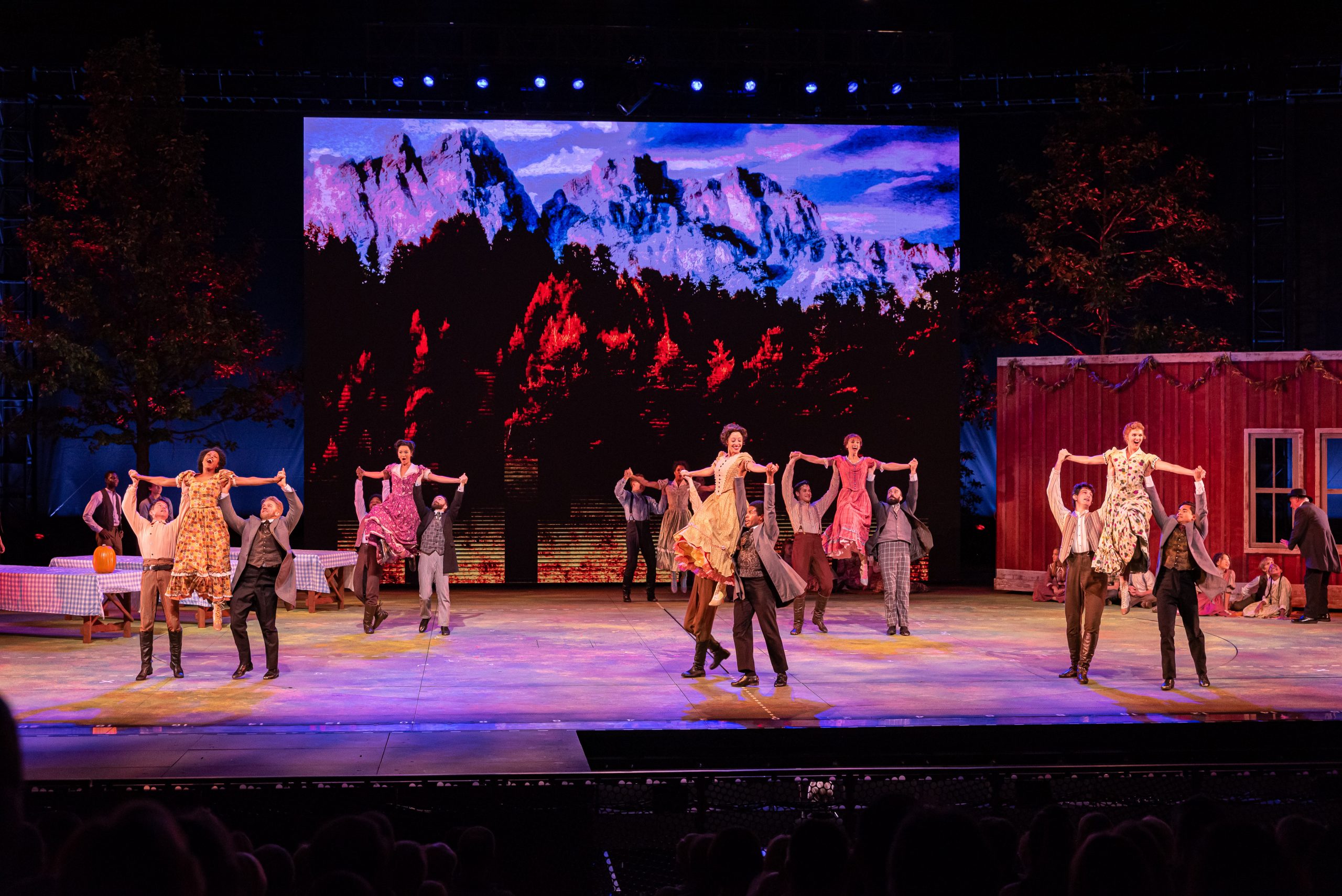 Adapted from the 1954 MGM film directed by Stanley Donen, Seven Brides for Seven Brothers is now playing through August 18 at The Muny in Forest Park.

The musical is a delightful show full of catchy tunes and wonderfully choreographed dance numbers. For those who have seen the film, the stage production features new songs written by Al Kasha and Joel Hirschhorn alongside classic numbers from the original, like “Bless Your Beautiful Hide,” “Goin’ Courtin” and “Sobbin’ Women” by Gene de Paul and Johnny Mercer.

Set in Oregon in the 1850s, Milly (Kendra Kassebaum) is working as a waitress when Adam (Edward Watts) bursts through the door and stops some of the townsfolk from harassing her. Something about him is different, and she decides to marry the man who she has just met. Meanwhile, Adam neglects to mention that their quiet, humble married-life on his farm will be shared with his six brothers: Benjamin (Harris Milgrim), Caleb (Waldemar Quinones-villanueva), Daniel (Ryan Steele), Ephraim (Garett Hawe), Frank (Kyle Coffman), and Gideon (Brandon L. Whitmore).

While the overall premise may seem a bit dated, the lessons aren’t – which, at the end of the day, is most important. In the updated version of the show, Milly comes across as a stronger, more independent character – and the foolish antics of the brothers seem more like naivety than misogynistic. It’s a show from 1954, so like any story from over 70 years ago there are going to be moments that seem crazy today. But the important thing is that the show’s heart always seems like it is in the right place.

Kassebaum turns in a wonderful performance as Milly, an anachronistic character for the time period who works wonderfully in the story. Milly has many modern sensibilities, not afraid to speak her mind or tell the men what she thinks of them. She’s a well-written character brought to life with conviction by the talented actor. Her vocal strengths lend themselves beautifully to numbers like “Wonderful, Wonderful Day” and “I Married Seven Brothers.”

As Adam, Watts has a powerful voice and commanding stage presence as he towers over many of the other actors. This perfectly cast “mountain man” is always believable as the head of his family, and a well-intentioned brother who does what he believes is best for the ones he loves. His chemistry with Kassebaum is undeniable, even when the characters are at odds. His character is one who belongs in the time period the story is set in, as opposed to Milly’s more modern ideas, and Watts does a good job presenting the now old-fashioned concepts without malice.

All of the brothers do a fantastic job when it comes to singing, dancing, and acting. Some of the best numbers in the musical showcase their talents. “Goin’ Courtin” is a joyous song where Milly teaches the brothers how to dance and talk with girls, which leads to the showstopping dance at the town social. The brothers, along with the rest of the cast, put on a brilliantly-choreographed number – one of the best sequences I’ve seen in recent memory. Hats off to Lee Wilkins and Josh Rhodes, who are responsible for the choreography as well as directing duties.

Gorgeous period-appropriate costumes by Amy Clark are on display throughout, with impressive set design by Michael Schweikardt.

Seven Brides For Seven Brothers delivers plenty of laughs, excitement, and genuine heart that the whole family will enjoy. The show has a playfulness that keeps things moving, while touching upon important lessons about family, honesty, and trust. The show is full of memorable song and dance, and this colorful cast of characters won’t soon be forgotten.