The Year in Sports

For most St. Louisans, 2010 wasn’t exactly a super memorable year in sports. None of the big teams won a championship, few players had standout years, and many of the teams in general were disappointing given pre-season expectations. Still, there were moments to remember. I’ll look back on the year in general for local sports as well as some national spotlight moments.

First, I’ll recap some of my favorite moments this year in sports, followed by the St. Louis/Missouri sports.

My friends and I are rabid hockey fans, so watching the US play for the gold medal at the Olympics was a rare treat. After the US dismantled Canada early in the round-robin tournament, we knew they had a real chance to win it all. The gold medal game was exciting, dramatic, and ultimately disappointing for our side, but it showed our boys can stand up to just about anyone in the world if we play well enough.

2. John McDonald hits one for his father on Father’s Day

This story brought tears to my eyes when I first heard about it. 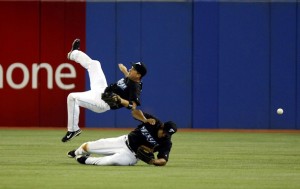 John McDonald’s a light-hitting infielder for Toronto. Five days before Father’s day, his father succumbed to liver cancer. One of his very last requests was that his son hit his next home run for him.

Not really an easy feat for a guy who’s hit 19 home runs in 2,025 career plate appearances. Home runs don’t exactly come in droves for him. After his father passed, McDonald got back to Toronto just in time for the game on Father’s day. He didn’t start, but he got one at bat late in the game on Father’s Day. And what happens? He drives a pitch over the left-field wall for his father.

Baseball’s by far my favorite sport, due in no small part because of the role it played in the relationship between my father and me. To see this moment was just another reason why baseball will always have special meaning to me. 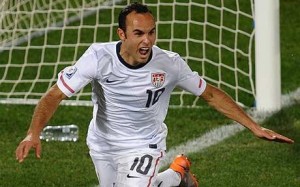 Even more so than baseball, soccer’s perhaps the most polemical sport in terms of those who love it and those who hate it. But even people who generally don’t watch soccer tend to follow the World Cup when it happens.

But then, this magical moment happened, perhaps the most significant goal thus far in US soccer history.

The United States was eliminated the next round, but it didn’t matter. This goal united a nation, which embraced the sport, even if only for a moment. And that’s why it takes the top spot in terms of sports moments of 2010.

Now, on to the sports review.

A season that began with lofty playoff expectations fell short as the Cardinals faded in the second half. Some players performed as expected. Albert Pujols had another typical career season [.312 average, 42 HR, 118 RBI] and finished second in the MVP voting. Matt Holliday overcame a slow start and produced numbers worthy of his new contract. Adam Wainwright retained his status as staff ace and has placed himself in the conversation for best pitcher in the NL for years to come. Yet for all the strong individual contributions, a team synergy never fully developed and by the end of September, the Cardinals were out of it.

Who knows. Heh. The Cardinals added another potential strong bat in former Astros first baseman Lance Berkman. They have also added other small pieces to the mix like shorstop Ryan Theriot and gotten rid of key 2010 pieces such as shortstop Brendan Ryan, who was traded to Seattle for a minor league pitcher. Given the weak field of the NL Central, the Cardinals will contend once again for first.

The Blues made a super strong surge in the second half of the 2008-09 season and finished sixth. Needing a similar outburst this year, the Blues fell short, and ultimately head coach Andy Murray paid the price. This season, Davis Payne has done his best to field a competitive team despite a myriad of injuries that has claimed a number of the Blues’ best forwards, including T.J. Oshie and David Perron. Still, several bright spots have emerged. The Blues traded in the offseason for star netminder Jaroslav Halak (14 wins, 2.34 GAA, .916 save percentage), who has done well given the number of shots he’s faced per game. David Backes, who recently signed a five-year extension, is beginning to play up to his contract (9 goals, 19 assists), emerging as a young Keith Tkachuk.

2011 outlook: If the Blues can get healthy, they can emerge as a serious threat in the playoffs. They started off incredibly strong before the injuries began taking their toll. Once Oshie and Perron come back and begin contributing offensively again, hopefully the Blues can give more thought to Lord Stanley.

Except for two weeks the Tigers decided to take off in the middle of the season, the Tigers enjoyed perhaps their best season in recent history. They even managed to take down a number one ranked team during the regular season, Oklahoma, against whom they had not enjoyed much success. They subsequently faltered against Nebraska and Texas Tech. Had they won one of those two games, they would have played against Oklahoma again for the Big 12 championship and a spot in the BCS field.

Unlike other recent seasons, the defense was the cornerstone of this team. The Tigers ranked sixth nationally in points given up per game, just 15.2. Lacking a top-end receiving talent like Danario Alexander or Jeremy Maclin, Blaine Gabbert threw for just 2,752 yards per game and 15 TDs, compared to 3,593 and 24 last year, respectively.

Ultimately, however, the 2010 season has to be considered a success overall, as the Tigers won at least 10 games for the third time in four seasons. They play Iowa in the Insight Bowl tonight. Win, and they could finish the season ranked in the top 10.

2011 outlook: The Tigers have the potential to compete once again for a BCS bid. Many of the players from this year will be returning, as the Tigers don’t have many seniors on the depth chart. If defensive end Aldon Smith stays, the core nucleus of this team will remain intact.

After an abysmal three seasons, 2010 has to be considered a monumental success. Going 6-42 from 2007-09, the Rams are thus far 7-8 this season and are playing for the NFC West title on Sunday in Seattle. The Rams’ top two draft choices this year, Sam Bradford and Roger Saffold, have played like veterans. Steven Jackson has carried his typical load, rushing for 1,196 yards and 6 TD. Chris Long is playing up to his draft pick, registering 8.5 sacks. James Hall has added 10 sacks. James Laurinaitis has to be considered the steal of the 2009 draft, as he has established himself as the leader of the Rams defense in just his second year.

But the most obvious catalyst for the Rams’ improvement has been Bradford, who has demonstrated just how much a team depends on its quarterback. Bradford has had a terrific rookie season, throwing for 3,357 yards thus far and 18 touchdowns with a very limited receiving corps. If the Rams can trade for a solid number one receiver or draft one, the sky would be the limit for the Rams offense next season. Injuries decimated the receiving corps this year, with Donnie Avery, Mark Clayton, and Danario Alexander all missing extensive time. Yet Bradford has set the record for rookie completions and will most likely set the record for rookie attempts this coming week.

2011 outlook: This team is making great strides under coach Steve Spagnuolo. With one more solid draft, they could be contending for the Super Bowl within a year or two. Up first, however, is a prime time battle for the NFC West on Sunday night.