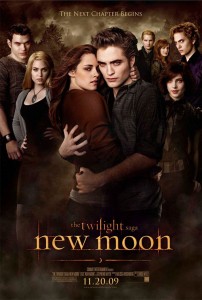 The Twilight Saga returns with a new director, a new set of monsters, and a New Moon, but the film feels rather rehashed and far to similar to previous film instead this time it is girl meets wolf; compare to girl meets vampire.

Everything starts off alright, in fact it was making me feel quite positive about everything unfolding. Chris Weitz’s direction is far stronger and more confident than Twilight’s Hardwicke, with the camera doing far more interesting things. The focus seems to be solely on Bella, her father, and Edward and the Cullen’s as it should be and pushing all the unnecessary characters to the background. The actors seem to be doing better; everything seems to be going in the right direction and then the Cullen’s leave. The most, and almost only, interesting thing about these films is taken away for the majority of the film and only return in the final few scenes to save the film from being a fairly bad experience.

The story mirrors Bella’s path in the first film with a weird killer in the woods, a budding romance with a boy with a secret, and a secret group of creatures living secretly right under her town’s nose. The new boy is Jacob, Bella’s old friend from her childhood who lives on the local reservation as he is a Native American. A bit younger than Bella, he has always kind of had a thing for Bella, and now with Edward out of the picture, he makes his move. Bella and Jacob slowly bond, but her desire for Edward can’t fade as they become closer friends and his secret is revealed. While the two have chemistry, we have seen this song and dance before in the previous film. Plus, all of the things Bella does to cut her adrenaline going to “see” Edward gets a bit ridiculous and never lets us really buy into the whole love triangle as Bella really shows no signs of leaving Team Edward.

Besides the romance not really working and Bella’s bitching getting a bit to much to bare, the effects work was a real disappointment. The few set pieces in the film were pretty well crafted, it’s just the effects work was only adequate and not awesome A+ stuff. These films make so much money there is no excuse for a shotty effect shot or blue screen work in this picture and there are a number of nasty takes. The wolves look good, could look better though, but I guess the target audience of this film isn’t that worried about that; though every shot of the cliff was border line horrendous. The film also jumps around quite randomly at times and feels like we are missing huge plot points or they get glossed over with a sentence. The first film had this issue as well and as in the first film as well it stays away till the final act which all of a sudden rushes forward and seems a bit too convenient.

But, there were some things that worked in the film. Everything with Edward, vampires, and the Cullen’s was very good and the best part of the film. The dynamic of Bella and Edward arguing over turning her is also a nice little thread, but the most promising element of this film is the introduction of the Volturi family in Italy who are the sort of deciders of the Vampire race. Michael Sheen and Dakota Fanning will provide some solid actors for their future plots and they are as interesting and engaging as Edward, Alice, and Carlisle Cullen. Looking forward to more of them and the high point of the series so far is the encounter with the Volturi.

In the end, New Moon is sadly neither a step up or down for the series but continues to serve as a sampling of intriguing ideas and characters that they can’t flesh out into a fully engaging story. I don’t know how the wolf/vampire dynamic will play out in the last two films, as the wolves seem to be almost useless now even with the half assed attempt to keep the threat alive in the final scene. Though, if they can keep the dynamic alive, lets hope they make it interesting and compelling and same for the rest of the story, focus on the Cullen’s and Volturi and this series good eventually become a good franchise instead of an average one.