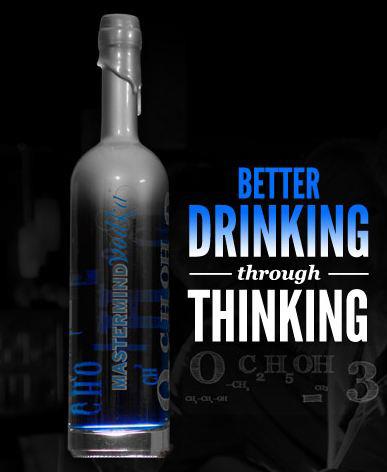 Spend a few minutes talking with Nick Roady and you’ll quickly discover he’s serious about vodka. As Vice-President of Sales & Marketing for Mastermind Vodka, you wouldn’t expect anything less.

“If I can’t drink it straight, I won’t drink it,” he offers, referring to the quality of vodka. It may sound somewhat snobbish to read, but the way he explains it, it makes perfect sense.

Spirits were meant to be consumed straight, he says. Before Prohibition, every distiller was essentially a craft distiller, paying close attention to detail and quality. Once Prohibition struck with the 18th Amendment, though, people resorted to desperate measures, promulgating “bathtub gin” and other illegal spirits. The quality was so low, and the taste so rancid, people couldn’t consume the liquor straight, so they went to the nearest drug stores and purchased various syrups and beverages to cut the taste.

Even now, after the repeal of Prohibition with the 21st Amendment, the effects linger. Walk down the liquor aisle of a grocery store, and on the bottom shelves, you’ll see fifths and handles of cheap alcohol. I’m not immune to them; back in my college days, some of my buddies and I would split a handle of the cheapest vodka we could find, lining up shot glasses and doing them all in a row. Nothing good ever came from these nights, and in my case I had to purchase a new keyboard after one such evening.

St. Louis and its metropolitan area are predominantly a beer town, so there isn’t a big niche market for top-end liquors yet. This is what Mastermind Vodka is seeking to rectify, becoming the first distillery in Southern Illinois since 1882. Started in 2009, Mastermind is essentially a two-man operation, consisting of Nick and Carl Levering, president.

Making the trip across the river to visit Nick and Mastermind over in Pontoon Beach (which, by the way, is rather misleading, as I saw no beach, nor did I see a lot of granite on my way to Granite City afterwards; maybe I was in the wrong parts of town), I was immediately struck by how small of an operation Mastermind is.

Mastermind’s still and offices are in a rather small unassuming building tucked away on State Highway 162. Pulling up in the parking lot, I was immediately greeted by Carl. I sat down with Nick, and over a chilled serving of Mastermind, we talked about the driving force of Mastermind.

It began, as many great ideas do, with an evening of drinking.

Nick and Carl were in the Ozarks relaxing with a few friends when they stopped by a liquor store to gather beverages for the evening. As they perused the selection of vodka, a thought dawned on them.

Facts about Mastermind Vodka
– founded in 2009 by Nick Roady and Carl Levering
– based in Pontoon Beach, IL
– produce three batches a week
– locally-produced grain
– bottles and seals produced and decorated in US
– official website of Mastermind

“If you think about vodkas, you tend to associate them with Europe and Russia,” Nick said. “With Belvedere, you think Poland. Smirnoff, you think Russia. Absolut and Svedka, you think Sweden.

“So we thought, ‘we have the greatest grains in the world growing here. Why can’t we make a premium vodka here?'” he reasoned. And with that, Mastermind vodka was born.

Getting started proved to be more difficult than one might think. First, they had to choose the location for their distillery. Given that there are three across the river in Missouri, they looked around at cities in Illinois before deciding on Pontoon Beach. From there, they had to acquire a license to produce alcohol after a careful inspection of their custom-designed still, which was incredibly difficult, Nick admitted. “You have to be in business, then apply for a license; however, you can’t produce any alcohol without a license.”

Once they got that, they began the lengthy process of trial-and-error to perfect the flavor of the vodka. “It took us about three years to produce the mash we use in Mastermind,” Nick said. “We use both corn and wheat. Corn produces the cleanest vodka, and the wheat we use produces its smoothness.”

The process of producing the vodka itself is, in in basic terms, simple.

– Enzymes break down the grain starches into a simple sugar, and yeast then converts the sugars into ethyl alcohol.
– The alcohol is then heated inside the still. During the boiling process, the first chemicals (such as methanol) that are boiled off, known as the “heads,” are discarded.
– The ethanol is captured in glass vessels. The fusel oils, or “tails,” are the chemicals that remain after the alcohol has been boiled off; these are also discarded.
– The resulting ethanol, which comes out of the process at approximately 190-192 proof (95-96% alcohol), is then diluted with water before bottling. 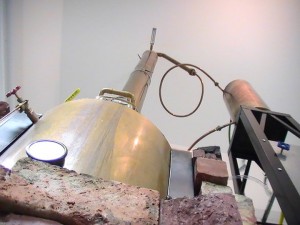 True to their word, every ingredient in Mastermind is American. The corn and wheat are locally produced. The water filtration system used in the production is American-built. Even the packaging materials are produced here; the bottles are manufactured in Park Hill, the decorations are done in Batavia, and the liquid seal for the top is produced in San Diego, CA.

The result is a remarkably smooth vodka that, in four separate taste tests conducted by local sommeliers, has outscored every other ultra-premium vodkas it’s been pitted against. The cost per bottle could have been tempered by exporting some of the production, but Nick and Carl take pride in the fact that no step in production is outsourced.

A rough road leads to the stars.

The distillery is up and running, but Nick and Carl still face perpetual challenges. Although they have found a distribution partner in Illinois, they are still working to find one for Missouri, something that has greatly hindered their ability to market Mastermind to a major target audience. Because they remain such a small operation, their marketing budget is much smaller than the vodka giants. It would make life a lot simpler for them if they could simply sell it directly to bars and stores, but unfortunately, they must adhere to a three-tiered system. As a manufacturer, they must sell to distributors, who can then sell to retail; they cannot be both manufacturer and distributor. 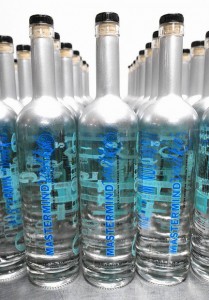 Getting Mastermind running has been a largely heuristic process for Nick. A graduate of SIU-Carbondale’s engineering program, he’s well-spoken and knowledgeable about a variety of subjects, but he admits to a few missteps while learning.

“(Producing spirits) is a very competitive market, and vodka is arguably one of the toughest spirits to make,” he said, noting the fact that vodka is cleaner and comes out at a higher proof than most other spirits. Nick and Carl quickly picked up on the challenges. In addition to the corn/wheat blend initially used, the chemicals in the water used to dilute the vodka have an effect on the taste of the final product, so Nick and Carl devised a filtration system to be used.

Even the manufacturing has provided its challenges. Each bottle is hand-dipped in a seal, which is then individually inspected; any bottle that does not meet the aesthetic standard is dismissed. The drying of the sealing itself must be monitored. Nick points out, “We found out during the process that one particular brand patented the drips of its wax seal over its bottle in 1994.”

I can’t help but think, though, once distribution is secured in Missouri, the sky is the limit for Nick and Carl.

The product itself is remarkable. I first tasted it at the Riverfront Times Point and Clique Web Awards and was absolutely blown away. Doing a full taste review did nothing to diminish my opinion of it.

Tips on serving Mastermind
Want to play classy bartender to your friends while serving Mastermind? Keep these tips in mind.
1. If you’re going to drink it straight up, put the bottle in the freezer for a couple of hours. If you want to cut the vodka a little with ice, skip this step.
2. Shake the bottle before serving. Water weighs about 8.3 lbs per gallon, while alcohol weighs about 6.6, so the alcohol tends to sit at the top of an undisturbed bottle.
3. If you chilled the vodka, pour neat into a glass. If you’re going to cut it, pour it into a straining container with a few cubes of ice. Swirl it lightly and strain straight into a glass. Pouring it on the rocks will dilute the taste quite a bit.

Now, in the interests of full disclosure, I’m far from a vodka expert. I enjoy vodka, and typically order either a vodka tonic or a concoction I’ve affectionately dubbed the Steve (sweet tea vodka, triple sec, sweet ‘n sour, and Sprite), but I don’t get paid to be a critic or anything. I’m sure there are probably vodkaphiles who would sneer at me and my drinking methods, but most people aren’t super vodka connoisseurs. Chances are if you’re reading this, you’re like me, enjoying a drink or two at dinner or the bar. Having said that, of all the vodkas I’ve had in my life, this is perhaps the smoothest brand I’ve had in as long as I can remember. It has a flavor that’s present but not overpowering, and the finish is extremely clean.

Down the road, Nick and Carl hope to get into expanding their product line. The next step is a moonshine called LPR, which Nick describes as an unaged corn whiskey. Beyond that, Mastermind is hoping to produce other lines such as brandy, gin, and grappa. They’re also tinkering with the notion of flavored vodkas, but it could be a while before its perfected.

The bottom line is, if you enjoy premium or ultra-premium vodkas, you owe it yourself to at least give Mastermind a chance. Mastermind is ten minutes across the river, and they welcome visitors, so you can stop on by and check out the company yourself and sample the product. If you’re in Illinois, you can find it at your local grocery or liquor store already. They’re closing in on a distribution deal for Missouri, so those of you who live in and around St. Louis will soon be able to find it in grocery stores, liquor stores, and at your favorite watering hole. Next time you’re out and about and feel like getting a beverage, don’t just drink; think.

Mastermind Vodka gets an enthusiastic A.

Find out more about Mastermind at its official website: www.mastermindvodka.com