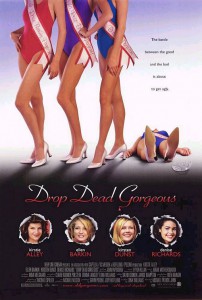 In June 1999 Drop Dead Gorgeous was a film that kind of got lost in the shuffle.  It opened the same weekend as both The Haunting remake and the live action adaptation Inspector Gadget which neither were great films, but they were certainly a little more popular than the film featured in this article.  I knew nothing about the film going into it, but it has been a comedic favorite of mine ever since.

In this mockumentary, Mount Rose, Minnesota is gearing up for their annual beauty contest.  Amber Atkins and Becky Leeman appear to be the town’s frontrunners, but this year the contest becomes deadly as one contestant after another passes away due to “accidents”.  Who will be left to take the stage and showcase their talents come pageant night?

The film doesn’t exactly boast a star studded cast, but everyone plays their roles perfectly.  Actors and actresses that play the other contestants and pageant judges are hilarious, and these are the least known of the cast members.  Kirsten Dunst and Denise Richards headline the film.  While Richards may best be known for Wild Things, this is easily her best screen performance (not saying much after a quick look on IMDB).

Other great performances include Ellen Barkin and Allison Janney playing Dunst’s mom and best friend respectively.  They stole every scene they were in.  The film also features the film debut of Oscar nominated actress Amy Adams as the most sexually suggestive contestant in the pageant.

While there are certainly better mockumentaries out there, this will provide you with plenty of laughs throughout the film.  I think the film is about fifteen minutes too long.  Once the story gets away from the local pageant I want to stop the movie every time, but this is still worth checking out since the first two-thirds are great.  I love the mockumentary film style when it is done right.  So if you are like me then you need to check this out.

Have you seen Drop Dead Gorgeous?  What did you think of it?  Do you have any suggestions on a future “Hidden Gem” article?  Let us know in the comments below.