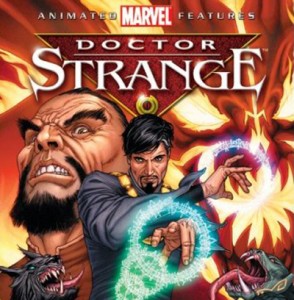 I am a superhero fan.  Plain and simple.  I like to think that I know a decent amount about both the Marvel and DC universes.  I have my particular favorites that I know much more about just like everyone.  So the recent surge in live action superhero films has been a very welcomed treat.  Unfortunately, this does cast a little bit of a shadow over the great direct-to-DVD films that Marvel and DC have been putting out.

I have been trying to keep up with all of them.  I must say that DC’s films have been much better, but I have enjoyed Marvel’s very much.  This week’s hidden gem really stuck out for me.  Mainly because Doctor Strange is a character I knew nothing about.  I have seen Doctor Strange: The Sorcerer Supreme about three times in the last year, and the action, animation, and story still keeps me interested with every watch.

Though he may not be as famous as Spider-Man or the X-Men, Marvel Comics hero Doctor Strange is a force to be reckoned with. Armed with his supernatural powers, Dr. Stephen Strange fights evil in this animated action film. Strange makes the perilous trip to a mountaintop in Tibet, and he is healed by the strength of the Ancient One. But the Ancient does more than just heal his scars; he endows Strange with the gift of sorcery. His powers come at just the perfect time as enemies surround him, and only magic can defeat them.

The first comparison this film is going to draw is to Batman Begins.  Doctor Strange is a real doctor.  He reminds me a lot of Bruce Wayne.  They are both good looking with a lot of money.  On top of that, the training that Strange receives is in the mountains by a secret order very similar to that of Ra’s al Ghul and the League of Assassins.  But the comparisons stop there.

The story follows your typical superhero tale.  A reluctant hero who does not want to accept that he can be great.  The hero discovering the capabilities he/she has in an epic battle.  And the climatic battle between the one character behind the whole plan who may be closer than the hero thinks.  But it all works.  The action is great, and the characters are well crafted.

As I said before, I know nothing about the character outside of this film so I don’t know how faithful the story is.  Marvel Studios president recently made a comment about how Doctor Strange is a character they are looking to develop.  I am a little nervous about this.  Obviously there is very large mystical and magical element to the character.  The last time we saw a sorcerer on the big screen was Nicholas Cage last summer.  And we know how well that turned out.

If you are a superhero fan I feel like this is a must see.  I personally think it is the best of the Marvel animated films, but I also loved Iron Man and The Ultimate Avengers.  I hope that Marvel and DC continue to put out these films for the fans, but knowing that the companies are only looking at the returns, my guess is not many more will see the light of day.