Do you want to see “The Goods: Live Hard, Sell Hard” starring Jeremy Piven for FREE, at the St. Louis advance screening tonight? The first 15 people to comment below and tell us why they want to go will win passes! Hurry and enter now! 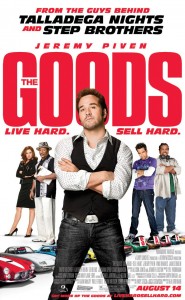 Who is Don Ready? Salesman? Lover? Song Stylist? Semi-professional dolphin trainer? Ready is all of the above — except for a dolphin trainer. When he’s asked to help save an ailing local car dealership from bankruptcy, Ready and his ragtag crew descend on the town of Temecula like a pack of coyotes on a basket full of burgers. Selling, drinking, selling and going to strip clubs is their stock and trade. And they do it well. What Don doesn’t expect is to fall in love and find his soul (cue heartfelt piano). ‘The Goods: Live Hard Sell Hard’ stars Emmy award-winning actor Jeremy Piven (‘The Kingdom,’ ‘Entourage’) and Ving Rhames (‘I Now Pronounce You Chuck and Larry,’ ‘Mission: Impossible III’). The film is the first production from Will Ferrell and Adam McKay’s Gary Sanchez Productions, directed by Neal Brennan, co-creator of the hugely successful Comedy Central hit, ‘Chappelle’s Show.’