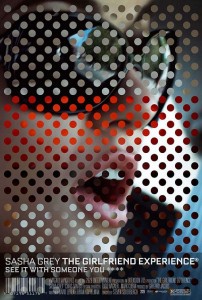 Steven Soderbergh’s latest small budget “experimental” film is a triumph in both story telling and originality while successfully taking us into a world few of us understand while pairing it with a theme we can all relate to with the timely issue surrounding the downturn in the economy.

First off, for being such a low budget film Soderbergh’s film looks pretty darn good and does a lot of really interesting and unique things with the camera, look, and feel of the picture; but this isn’t really a surprise coming from someone as talented as Soderbergh.  The film’s style also gives us an intimate feeling with our two leads and we feel right there in the room with these people listening in on their comings and goings.  Soderbergh does a great job at pulling us in and connecting us to the story even though it is told so scatter shot and out of sequence, but more on that later.

The film follows two individuals that happen to be together, or maybe not; one is a high class call girl, Chelsea, who is trying to give her profile a boost to make more money and get bigger clients the other is her boyfriend, Chris, who is a personal trainer who is trying to lock in more steady work as getting people to commit long term is kind of tough in the worsening economy.  Now, your probably thinking that the drama is going to surround the boyfriend finding out she isn’t a waitress or something she lied about and flip out when he learns she has sex for money but that isn’t the case.  The two are really happy and all understanding of the potentially volatile situation but we learn very early on that something has driven them a part and as the film unfolds we are slowly given the pieces to figure out why the couple is now on the outs.

The films editors deserve a pat on the back for creating a film that jumps through time over a week or so period and at both ends of the relationship when they are happy and then suddenly apart and making it not only entertaining but coherent.  As the film unfolds and we slowly connect the dots each scene we have previously seen gains more weight and new meaning and it is really quite a brilliant piece of filmmaking.  There is one thing that holds the film back though and that is the weak rationale Chelsea uses to make things a problem.  I don’t know if it was Sasha Grey’s acting or what, but she does such a convincing job everywhere else I think it was just probably a weak concept that they don’t focus on enough to give her beliefs enough weight.  Anyways, this moderate speed bump doesn’t derail us enough to ruin the picture and the film sucks you right back in even if you think her thinking is a little funky.

There are a couple of other plot threads that pop up as beyond the couple’s fall out as well and they are all just as interesting.  Whether it be discussions between Chelsea and another call girl over their relationships and what they mean to them, jealousy surrounding clients, competing against the new girl in town, or being interviewed about the profession of being a call girl there are a lot of interesting threads to follow.

Speaking of Sasha Grey, when this porn star was picked by Soderbergh to star in the film many figured it was a marketing ploy or some stunt to sell tickets but he knew what he was getting into with her and Grey is fantastic in the film.  She is vulnerable and comforting and also conveys this dull attitude to her chosen life as well that always keeps you wondering why she is going down this path?  In the multiple scenes we see with some of her clients she is sweet and natural and for those hoping to get a look at her skin there isn’t a whole lot for you.  They didn’t bring her on board to show off her sexual skills but her knowledge and background in having sex for money allows her to bring a lot to the character I believe.  In fact her confessional heart pouring moment after a nasty encounter with a sleazy “reviewer” is quite affecting and Grey is wonderful in this moment.  In fact Glenn Kenny deserves special mention as the reviewer “The Erotic Connoisseur” as he just gives you this uneasy feeling and while the events are never shown, we totally buy into the nature of Chelsea’s experience when she lets it all out.  Chris Santos is also really great as Chris and I hope that he finds a lot more acting work if he is looking for it as he hasn’t really done a whole lot up until this film.  He not only nails the trainer aesthetic but just feels so natural and real in everything he does you forget that you are watching an actor, great stuff.

In the end, The Girlfriend Experience is a fantastic achievement in storytelling and filmmaking as they pumped this film out in a matter of weeks on no budget.  Sasha Grey shows that she could find more work as a conventional actor and is supported by a wonderful cast of unknowns that make this film feel honest and true.  The films fractured nature might challenge and scare some but in actuality is used wonderfully to give the film a unique feel while also giving the film a sense of mystery as we try and figure out what happened.  The film is also as timely as any right now when it comes to economics and if Soderbergh’s smaller works continue to perform at this level I hope he never stops doing them.

The Girlfriend Experience is an A-