The Double Feature: Scott Pilgrim vs. The World and Kung Fu Hustle 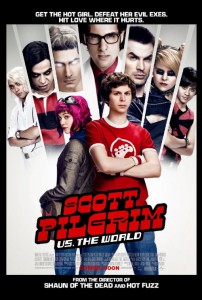 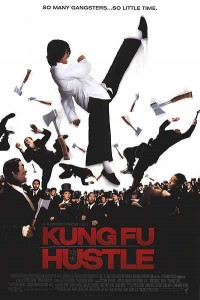 The Double Feature will take a look at a new release title in theaters (well, most of the time) and pair it with a film you can create a double feature with after you get back to the comfort of your living room.

Sometimes it will be obvious, other times not so much but I hope this gets you thinking about some other good double features of your own creation. The double feature is a bit of a lost art if you ask me, and while I am no expert at them I love figuring out a couple good films to play together.

Up this time: Scott Pilgrim vs. The World and Kung Fu Hustle

I am pretty sure Edgar Wright is on the record that Stephen Chow’s Kung Fu Hustle is an influence on his film, but the two worlds of Scott Pilgrim and Kung Fu Hustle could easily be argued that they are one in the same.

I love Wright’s way of describing his film, Scott Pilgrim vs. The World, so I will just let him do that:

“We thought it should play out like a musical in a way in terms of the fights are not dissimilar to the songs. I always thought there were a lot of martial arts films that were like musicals, so we wanted to take that further. Ya know, in a Gene Kelly film when he performs an amazing routine, at the end of the scene no one goes, ‘Oh my god, that was fucking amazing!’ The song is about something, and then there might be some dialogue at the end that is also about that theme. And that’s kind of how this works where people have these huge fights – and it’s kind of like how it is in the books – where everything goes back to normal, and there’s a little reaction to what just happened, but there’s no sort of mourn the dead.”
That paragraph perfectly sets some one up for the film and I believe without a doubt one of the marital arts films Wright is talking about in that quote above has to be Kung Fu Hustle.

Chow’s film exists seemingly in the same world as Wright’s realization of Bryan Lee O’Malley’s Scott Pilgrim.  Both in Scott Pilgrim and Kung Fu Hustle these huge and insane fights will break out between these master fighters and no one bats an eye at it as if it was anything unordinary when it is all said and done.  The physics, lunacy, and over the top nature of the battles in these films are both incredibly fun and perfectly executed by their respective directors and feature a wide variety of combatants.

The way the fights progress as each film moves along even mirror each other, the only major difference is that Scott Pilgrim has a constant contestant in its title character.  The fights in each film slowly involve better fighters and get bigger and bigger in scale as the characters attempt to rip each other limb for limb.  The action in Kung Fu Hustle rotates fighters in and out frequently with no one fighting in more than two fights as a new stronger fighter usually shows up to take down the previous fights winner and there is a clear skill progression as things move forward.  Pilgrim moves up the ranks one at a time but his challengers bring greater hurdles as he move forward.  Things get tougher for our heroes as they move along and that is how it should be, but I am not quite sure if Scott Pilgrim can top Kung Fu Hustle’s crescendo to through its final battle.

Wright’s film is focused on his hero’s journey and as he moves up the ranks his challengers get harder and harder; as if he was moving deeper in deeper into a video game.  The films’ combatants have unique skills and abilities and while it helps differentiate the fighters from one another, these traits also give the characters a little bit of extra charm.  Devastating screams, vegan superpowers, Buddhist Palms, mystical powers and deadly musical abilities, these fighters have many tricks up their sleeves.

The films are almost live action cartoons as people fly through walls and hop right back up, characters perform aerial combos as they fly with ease, and the films have this feeling that anything is possible in their world.  These films set up their worlds and rules with ease and that allows for all the insanity to unfold without the viewers stopping and saying, “Hey this can’t happen.”

But enough about the fighting, these films are in the double feature together because beyond being insane action films they are brilliant comedies full of great characters.  The ensembles in these films are large, diverse, and talented; Chow’s filled with old martial arts experts/stars, Wright’s with the hot young stars/comedians of tomorrow.  Beyond their excellent casts, the wealth of characters are full of diverse and interesting personalities that everyone should be able to find someone to latch on too.

There is a diverse brand of humor on display from the most childish of jokes to sharp witted dialogue, Chow and Wright use every brand of comedy and nail it almost every time.

These films are also great at paying homage to the works that inspired their directors and the films/games/books that preceded them.  The films are littered with nods and winks to fans of the genres they are playing in and the worlds that influenced them and besides being excellent adventures in their own right the films are full of little surprises. The music in this pair of films is also some of the best pairings of images to sound that I have heard in recent memory (especially Kung Fu Hustle) and each respective director perfectly creates moments for both the eyes and ears.

Both of these films take the classic hero’s journey and turn it on its head.  Fighting a league of evil ex’s isn’t the normal hero’s path and you will be hard pressed to find a similar path to victory in any other medium.  Each of our heroes has to find themselves and that will eventually lead them to the women in which they have a chance for love.  The trials and tribulations that the heroes go through will leave them battered and bruised but both come out stronger and better men on the other side.

Edgar Wright and Stephen Chow are two of movie making’s brightest rising stars and we should appreciate the fact that they have the balls to create such original and fun visions for us to enjoy.  These two films are seemingly born from the same egg and will make an excellent double feature when you want to keep the crazy ass kicking high alive after checking out Scott Pilgrim vs. The World this weekend.  So pick up Kung Fu Hustle, if you haven’t left for the store already, and I promise you will not be disappointed any step of the way.