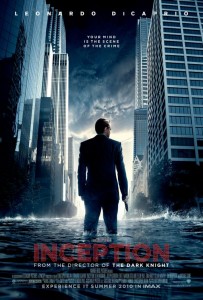 The Double Feature will take a look at a new release title in theaters (well, most of the time) and pair it with a film you can create a double feature with after you get back to the comfort of your living room.

Sometimes it will be obvious, other times not so much but I hope this gets you thinking about some other good double features of your own creation. The double feature is a bit of a lost art if you ask me, and while I am no expert at them I love figuring out a couple good films to play together.

Up first, Inception and Shutter Island!

I know this isn’t the most original or inspired pick, but hey, you got to start somewhere, right? Either way, these films have an obvious connection in their star Leonardo DiCaprio, but it is the characters he inhabits in these films that are the real spark for comparison of the two films.

Cobb of Inception and Teddy in Shutter Island are both a pair of tortured souls who have some serious issues with their ex-wives who both go quite a bit crazy. The films are both cathartic processes that each character needs to get over his loss and hopefully move forward in his life, and depending on your point of view, neither of them achieve this.

I for one believe Cobb achieves his needed growth and wins the fight with his subconscious and is able to move on with his life, but there are obviously a lot of people out there who think that Cobb dives deeper into his subconscious hiding himself from the reality of the situation in a world of his own creation. If you want to get more into that debate you can head over to our already existing discussion on the topic. What is intriguing to dissect in these two characters is that both Cobb and Teddy are far more comfortable in their worlds of self creation and prefer living their life as a lie rather than buck up and face reality. Teddy even goes as far as getting himself voluntarily lobotomized so that he can forget reality and live in a perpetual state of nothing, hiding from the truth forever.

To that I pose this question though, are both characters not potentially damning themselves to a lifetime of sorrow and despair based on what we know and don’t know of each world. Take Cobb, he and we have seen the effects of living in limbo can do to one’s mind in his dead wife Mal and if you believe Cobb is diving into limbo, again I am not of this belief, isn’t he potential casting himself into a potential disastrous state of mind of knowing that the world he lives in is not truth? Teddy on the other hand is submitting himself to lobotomy in hopes of erasing the atrocities his wife and he himself made that he now can’t shake after being awoken from his delusional fiction he has been living in since the incident. But what if Teddy’s lobotomy doesn’t wipe the memory and only disables him from communicating that he is still aware of his past and he becomes stuck in a prison much like Cobb where he might not be able to ever escape the truth or reality. Cobb attempts to turn his back on the truth in that final shot, but whether he is in limbo or reality I find it very hard that he won’t be haunted and anxious as to whether everything is in fact what he thinks it is.

Beyond the characters the films are both possibly the most genre type pictures of their respective directors, Martin Scorsese (Shutter Island) and Christopher Nolan (Inception). Both have dealt with genre in the past but neither have dived head first into such a pure genre picture that they do in these films; well for Scorsese, at least in his recent run of pictures.

Both films are obviously deeply rooted in the mind of their protagonist as well and let dreams tell parts of their stories as well as give clues to the protagonist to try and help them move on through their issues. Teddy’s dream’s are slowly blending with his reality as reality tries to seep into his created world, while Cobb’s reality disrupts his dreams and won’t let him move towards his ultimate goal of returning to his children. Cobb can’t forget his past; Teddy only wishes to get further away.

Both are also visually rich tales that never let you get your baring as you try and put the pieces of the puzzle together. Admittedly, Shutter Island is a far greater labyrinth to weave then the not nearly as dense as it is perceived Inception, but both films are full of excellent mind teasers for one to ponder. The films also treat their audiences with respect and don’t ever slow down to catch up those that it leaves behind. Adult minded entertainment hasn’t gotten much better than these over the calendar year.

Inception and Shutter Island are two of the most stimulating films of 2010. Complimenting each other and playing wonderfully back to back, I guarantee they will ignite discussions around the parallels and perpendiculars between the two films. This double feature will give you plenty of fodder for you and your friends to chew on. Be it their shocking final moments, discussing DiCaprio’s mindset having chosen to play such tortured and similar characters so closely together, or the merits of their excellent director’s operating in top form I think these films are rich with discussion. So after you see Inception for a second or third time this weekend, do yourself a favor and check out Shutter Island on video again or for the first time if you haven’t seen it already. I think your brain will be tickled as you draw the similarities between the two while watching one of this generation’s greatest actors in DiCaprio deliver some of the years best performances.