THE CLEVELAND SHOW premiered last night on FOX. Watch it online now if you missed it. 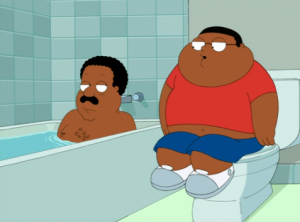 Everyone’s favorite soft-spoken neighbor CLEVELAND BROWN moves to his hometown in Virginia with his 14-year old son, CLEVELAND JR. Many years ago, Cleveland was a high school student madly in love with a beautiful girl named DONNA. Much to his dismay, his love went unrequited, and Donna wound up marrying another man. Cleveland once told Donna he would always love her, and if this man ever done her wrong, he’d be there when she called. Well, this man done her wrong.

Donna’s husband ran off, leaving Donna with a teenaged daughter and young son. Now she’s open to Cleveland and offered him another chance at love. Unattached after the Loretta-Quagmire debacle and true to his word, Cleveland joyously unites with Donna, and he and CLEVELAND JR. move to Virginia to join their new family — a rebellious new stepdaughter, ROBERTA, a 5-year old stepson who loves the ladies, RALLO, and a collection of neighbors that includes a loudmouth redneck, LESTER, a hipster wanna-be, HOLT, and a family of talking bears: TIM and his wife ARIANNA.

For more information about “The Cleveland Show,” visit FOX.com.