Synopsis For “Rambo V: The Savage Hunt” Found, According to Ain’t It Cool News

This morning, Ain’t It Cool News posted what they say is the synopsis for “Rambo V: The Savage Hunt,” which is written by, starred in, and directed by none other than Sylvester Stallone. Harry says that it is the “official synopsis” which has been faxed around. Here is the synopsis: 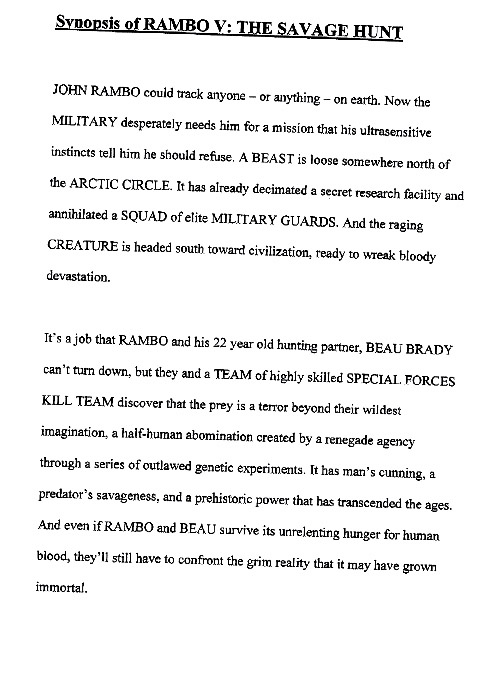 JOHN RAMBO could track anyone – or anything – on earth. Now the MILITARY desperately needs him for a mission that his ultrasensative instincts tell him he should refuse. A BEAST is loose somewhere north of the ARCTIC CIRCLE. It has already decimated a secret research facility and annihilated a SQUAD of elite MILITARY GUARDS. And the raging CREATURE is heading south towards civilization, ready to wreak bloody devastation.

It’s a job that RAMBO and his 22 year old hunting partner, BEAU BRADY can’t turn down, but they and a TEAM of highly skilled SPECIAL FORCES KILL TEAM discover that the prey is a terror beyond their wildest imagination, a half-human abomination created by a renegade agency through a series of outlawed genetic experiments. It has man’s cunning, a predator’s savageness, and a prehistoric power that has transcended for ages. And even RAMBO and BEAU survive its unrelenting hunger for human blood, they’ll still have to confront the grim reality that it may have grown immortal.”

Sounds interesting. I know that most people that I have talked to did not care too much for RAMBO IV, but I thought it was entertaining enough. Sly is in some pretty good shape for an old guy, which is more than I can say for some other actors, like the “Governator.”

We will keep you updated as the story develops.