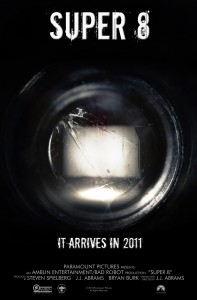 I feel like the coolest thing about the trailer for Super 8 is the fact that Abrams created that months before they even cast the picture.  Only shows how awesome the man really is.  Little is known about the film.  There were some set photos that came out showing tanks rolling through a neighborhood with big explosions in the background.

The Hollywood Reporter recently talked to Abrams himself about multiple projects he has going on, but I only really care about what he had to say about Super 8.

We’re editing, we have a post schedule that leaves a lot to be desired in terms of the luxury of time. But we have an amazing postproduction group and we’re hard at work editing. I just came from the editing room right now. Fingers crossed as always.

The man then told Collider that a full length trailer would hit theaters in March.  Let’s use some detective skills to guess what film it will be attached to.  Super 8 is being released by Paramount.  Paramount has a film coming out in March starring one of the world’s biggest stars, Johnny Depp.  Will the Super 8 trailer be attached to Rango?

What’s your favorite Abrams project?  Let us know in the comments below.