Raise your hand if you predicted the Cardinals would be in a tie for first at the All Star Break.

Most people certainly didn’t. I didn’t. Call them what you want, this team is certainly exciting and fun to watch. 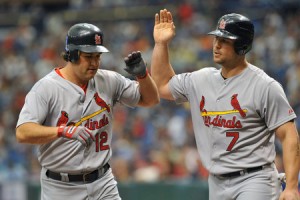 The Cardinals finish the first 92 games with a record of 49-43. Six over .500 isn’t terrible, but the fact that at one point the team was 12 games over .500 shows you there is a lot of progress that can be made. In a weak NL Central division (doesn’t it seem like we say that every year now?), 6 over is good enough for first, but it may not be good enough the rest of the way.

A few points of interest in the first half:

When I first heard about the Lance Berkman signing, I wasn’t sure it was a good move. Berkman was one of the most feared hitters in the NL for a decade, but his statistics took a significant decline last season. His spring training stats and beginning of the season weren’t exactly beacons of hope, either.

A trip to his old home in Houston was all it took for him to remember, “Hey, I’m a pretty good [email protected]|<ing hitter.” Lance has been far and away the Cardinals’ most potent bat this season, and he enters the break as a starting outfielder for the NL team. He’s hitting .290 and paces the NL in home runs (24), slugging (.602), and OPS (1.006). He leads the team in RBI with 63 and OBP (.404) among qualifiers.

A relative steal at $8 million this season, the question of what to do with him in the off-season will become a hot topic in the second half. Should the Cardinals not re-sign Albert Pujols, the Cardinals would likely take a flyer on Berkman’s services. If Pujols is re-signed, the chances of keeping Berkman would be slim, with youngsters Jon Jay and Allen Craig competing for at bats in the outfield. Still, it’s hard to overlook everything Berkman’s done for this team. He’s been a vocal leader in the clubhouse, and he’s helped pick up the slack offensively when the team’s other hitters have stalled. Berkman’s clearly the front-runner for comeback player of the year and has pushed his way into the discussion for MVP contention. Much of whether the Cardinals can get into the playoffs will rest on whether he can continue this pace.

There isn’t a bigger fan of Pujols than this guy. When he injured his wrist, I figured we wouldn’t be seeing him until August at the earliest. Lo and behold, the guy comes back in two weeks. Apparently the wrist is feeling pretty good, because in the five games since his return, he’s batting .300 (6 for 20) with a home run and 5 RBI. His season averages are slowly returning to Pujols-ian levels, as his slash line is at .280/.35/.500 with 18 HR and 50 RBI.

Just after he went down, writers were actually kinda curious how well the team would do without him, as it would offer one side a bit more leverage in off-season contract negotiations either way. Well, the Cardinals managed to go 6-7 with him on the disabled list (although they did win the first game he was activated when he sat), but they also averaged nearly a run less per game while doing so. Even when he wasn’t performing up to his stratospheric standard, he was still an imposing presence in the lineup. Hopefully the four days of rest will give us a resurgent Pujols to look forward to.

Still, the rotation has held steady for the most part the first half. Chris Carpenter got off to an atypically slow start to the season, but he’s come on strong recently, winning three of his last four decisions and lowering his ERA to 3.85. Kyle Lohse has enjoyed a career renaissance, as he has the second-most wins (8) in the rotation and the second-lowest ERA (3.32). The unquestioned ace, however, has been Jaime Garcia, who just recently signed a four-year extension to his contract worth roughly $27.5 million, with club options for two more years. Garcia leads the team in wins (9) and ERA (3.22). Jake Westbrook was expected to be the team’s number 2 in the rotation, but he’s been consistently inconsistent, possessing the highest ERA (5.34), but also the third most wins (7). Kyle McClellan started the season incredibly strong, but is possibly showing signs of wear, as can be expected from a pitcher who’s spent the last three seasons in the bullpen. Much like Garcia last year, watch for the team to start handling him with a little more caution to avoid blowing his arm out.

Things to Keep an Eye on – Second Half

The trade deadline is July 31, meaning the Cardinals have roughly two and a half weeks to assemble their lineup for the post-season run. Perhaps the most crucial upgrade the team could use would be in the bullpen.

Fernando Salas has taken over the role of closer, and for the most part he’s stepped up admirably. He’s recorded 16 saves in 18 attempts to go with a 2.25 ERA. However, part of the problem the team has had is getting the lead to him. The bullpen has taken its share of hits, deserved and otherwise. With the release of Ryan Franklin, many fans lost their main target of odium. The Cardinals are likely seeking relief help either to set up Salas or to take over the closer role, giving Salas the opportunity to set up the new closer. The Cardinals were allegedly in discussions with the Padres over Heath Bell, but are now believed to be out of the talks.

The Cardinals may not even need a new arm. With the infusion of Lance Lynn into the bullpen as a long reliever, the bullpen situation has become somewhat stable. In addition, rookie flamethrower Eduardo Sanchez is currently on a rehab assignment and will be returning hopefully within a week or two.

With Albert and Gerald Laird making their returns from the disabled list recently, the bench was reinforced as well. Outfielder/sometimes second baseman Allen Craig is getting set to go on his rehab assignment from a fractured knee, giving the Birds another potent bat. In just 107 at bats, Craig had been hitting .336 with 4 HR and 23 RBI before the injury. He’d been hitting so well that Tony had moved him from his natural position in the outfield to second base in an attempt to give him more plate appearances. Could this be a second version of the Skip experiment?

70 games to go. At the rate the team’s going now, they’re on pace to win 88 games, which could win the division. With good health and a little luck, this team could be playing deep into October. This might not be the best or most talented Cardinals team in recent memory, but I think they’re certainly one of the most fun. Don’t believe me? Look at the last week before the break. The Cardinals came back from multiple deficits and made even their defeats interesting. Teams of recent years may not have had the resiliency to do so.

Sit back, watch the boys. It’s gonna be a beautiful summer. Now, if only God could turn the heat down a notch.