Steve’s Preview of the 2013 World Series 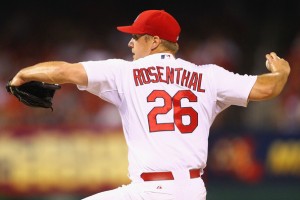 This is one area in which the Cardinals appear to have a small advantage. Boston does have Koji Uehara, who’s come a long way the last few years (he pitched for Texas in 2011, but did so poorly in the ALDS and ALCS he was left off the World Series roster). He had a tremendous 2013 and recently earned MVP of the ALCS. Backing him is Craig Breslow and Junichi Tazawi, but their bullpen was slowed a bit by injury this year, as both Andrew Miller and Andrew Bailey were lost for the season earlier.

If the starters can manage to go six innings each game, they’ll turn the ball over to a bullpen that’s young but hasn’t shown any signs of nervousness yet this postseason.

Combined, Trevor Rosenthal, Carlos Martinez, Seth Maness, and Kevin Siegrist have allowed an ERA of just 1.72 in 19 innings. Rosenthal’s been a breakout star as the closer this post-season. In the last two seasons, he has posted a 0.00 ERA with a ridiculous 0.574 WHIP in 15.1 innings while striking out 24.

On a lesser note, it’ll be interesting to see how Carlos Martinez is received should he pitch in Boston. He was originally signed as an international free agent by Boston back in 2009, but due to some questions raised about his paperwork (although his last name is officially Martinez, he was raised by his uncle and used HIS surname, Matias, when applying for a visa), the deal was voided and he signed with the Cardinals a year later. While I doubt most Boston fans will care, it’s interesting to note that had everything worked out, he could well have been pitching against the Cardinals in this series.

The Cardinals’ Offense is As Evenly Distributed As Ever

Back in 2004, if you shut the Cardinals’ MV3 down, you effectively shut the team down. And that’s what Boston managed to do with the Cardinals. Although Albert went 5 for 15, he drove in no runs, and Rolen and Edmonds combined to go 1 for 30, and although Larry Walker tried to pick up slack, the Cardinals only scored 12 runs in the series.

They relied on the long ball (214 home runs, third in the NL) and slashed .270/.348/.435 with runners in scoring position. Don’t get me wrong, chicks dig the longball, but there is such a thing as over-reliance.

This team, on the other hand, is much more balanced and relies on timely hits. Despite leading the NL in runs scored (783), not one person had 100 RBI. They did, however, have four guys with 80 or more: Craig (97), Holliday (94), Beltran (84), and Molina (80). Right behind them was Matt Carpenter (78), Jon Jay (67), and David Freese (60). Matt Adams, with half the amount of plate appearances as most of these guys, managed 51. This team, as has been mentioned numerous times, also hit at historic levels with runners in scoring position, slashing .330/.402/.463. This is a team that really adheres to the concept of “the next man up,” picking up the slack when others fail to produce.

Sure, his slashline this post-season hasn’t been at the historic levels we’re accustomed to seeing. Still, when you drive in 12 runs in 11 games, you’re probably doing something right. After 16 seasons and 45 post-season games, Carlos Beltran will finally get his chance to show what he’s got on the big stage. If the pre-cursors are any indication, we’ll see some fireworks. Most Cardinals fans have tried to block out the 2004 NLCS, when he went shot-for-shot with Albert Pujols in one of the most memorable slugfest series in history. It’s a shame that up until now, for his post-season legacy has hinged on one absolutely nasty curveball. Well seven years and four days after that pitch, he’ll finally get the chance to atone. Boston’s got their own post-season monster, Big Papi, but I like the Cardinals’ chances with Carlos. 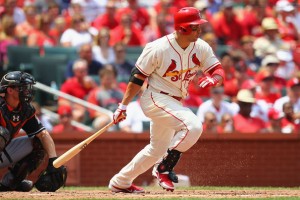 Win one for the Carlos. (Dilip Vishwanat/Getty Images North America)

One of the best things about baseball is that it’s so impossible to predict. The unlikeliest of heroes step up, while the expected workhorses fail when the whole nation is watching. It wouldn’t surprise me if this game went the full seven, nor would it surprise me if one team got spectacularly hot and swept in four or won in five (yes, I know what I wrote in my first point; I don’t think it’ll be a quick series, but I also used to think whenever actors died in a movie, they actually died in real life, so maybe I don’t know what I’m talking about).