No matter where we go, we always tend to remember where we come from. 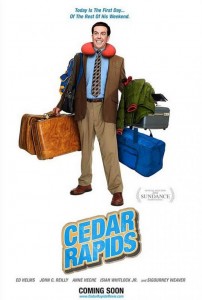 This is perhaps the point of Cedar Rapids that director Miguel Artesta tries to drive home. Well, it’s either that or you can learn what you need to know from the prostitute that sets up shop near the hotel you’re staying at.

Personally, I have found the latter to be completely false no intention of finding out whether the latter’s true.

I hadn’t heard too much about this movie, but anything with John C. Reilly can’t be too bad. I picked up my lovely friend Chelsea and we decided to check it out.

Ed Helms plays naive yet kind-hearted Tom Lippe, an insurance agent in a tiny Wisconsin town called Brown Valley. He’s never left his hometown, nor does he seem to have any desire to. He’s dating his junior high school teacher (Sigourney Weaver, who just seems to get better looking as she ages), and he seems to develop attachments to women at whim. His company has won the last three “Two Diamond” awards, which goes to the top insurance company in the region and is aiming for a fourth. When the top agent in the company dies due to a, umm, mishap involving a belt, his boss (Stephen Root) send Lippe to make his presentation at the annual convention.

Although a city like Cedar Rapids, Iowa, may seem like nothing to most of us, to Lippe it’s an entirely new world. He isn’t accustomed to the dangerous and at times lascivious behavior exhibited in a city. His roommate Ron (Isiah Whitlock, Jr.) is an earnest man who tries to guide Lippe through the weekend. He meets Joan (Anne Heche), a fellow agent who seems to take an interest in Tom despite the fact that she is married. Rounding out the core group of characters is Dean (Reilly), a wild yet charismatic agent Tom’s boss warned him about in the beginning. Although Dean seems to be a diometric opposite of Lippe, he demonstrates a depth few seem to have seen.

Along the way, Tom encounters many new experiences he’d never have in Brown Valley while facing enormous pressure from his boss to bring home the Two Diamonds award. He meets Bree (a grown up Alia Shawkat for you Arrested Development fans), a local, er…escort, who takes note of Tom’s kindness. As the crescendo of the film builds leading up to Tom’s presentation, he is forced to come to grips with the realization that not all of the world is as earnest as he had imagined.

There are a lot of absolutely hilarious moments in the film. Helms seems to have mastered the well-meaning-but-socially-awkward guy next door part, and he is well within his strength in this script. Whitlock and Heche provide solid support, but it’s the friendship between Tom and Dean that takes much of the spotlight, and rightly so. Reilly provides the expected comedy relief while at the same time never crossing the line into bad guy territory. The dialogue and interaction flow well throughout the film. On the other hand, there really isn’t anything groundbreaking in the film. Much of it progresses as a typical comedy does, and the characters never really present anything memorable in themselves, just the dialogue they present.

But, this is a comedy. This isn’t meant to be the next Citizen Kane. For those who like adult-oriented comedies of recent vintage, this film should hold you over until The Hangover 2 comes out. I left the film entertained, as did Chelsea, and I would recommend this film to anyone looking to kill 86 minutes this weekend.

Cedar Rapids gets a B.