Step Up 3D is the Savior of 3D in Cinema or: How to Stop Complaining About Post Coverted 3D And Realize The Potential In Native 3D Films 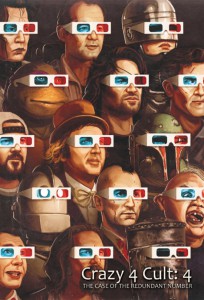 I never thought Step Up 3D would renew my interest in 3D at the cinema. While I was never a very negative detractor of the format, my patience has been tiring with this unfortunate run of mediocre post-conversions that we have been subjected to since Avatar.  But short term memory deprived detractors rejoice, Step Up 3D is here to remind us why people got excited about the format in the first place.

An excerpt from my Step Up 3D review that I think deserves its own conversation:

“..when it comes to the 3D, I would go as far as saying that this film will re-instill hope in the potential of 3D at the movies.  This is the first native 3D effort that shows off the capabilities of the medium in live action without a bunch of special effects or in an animated form.  Sure Avatar had plenty of live action moments in 3D but all of the action was pretty much handled in a computer or filmed on a motion capture stage.  What this film does is show how sharp and clear true 3D is when you film it in camera and that it can more than keep up with people moving as fast as humanly possible.  People are flying around, spinning and doing insanely fast dance moves and the 3D effect works great with excellent picture clarity.  The movie made me wish Edgar Wright had been able to see this film before making Scott Pilgrim because all I could think was how even more incredible Scott Pilgrim could have looked filmed in native 3D.  Director Jon Chu uses the 3D perfectly with the dance sequences and the film has me immediately anticipating the next non-cg effects heavy film shot in native 3D. Anyone sick of post-conversion 3D needs to check out this film to see what the medium is truly capable of as it adds an extra level to the beautiful and exhilarating dance sequences that are choreographed brilliantly.”

I full stand behind my comments and I have to admit that I am very excited at the future of 3D; especially those shot in the format.  I know a lot of people have been up in arms over the post conversion process, which hasn’t been executed at anything more than an OK level so far, and claim that 3D is a waste of time and stupid.  Well think back to only eight months ago when you saw Avatar for the first time in 3D and it kind of rocked your world at the potential of it all.  Well that is the only other native live action release till this Friday’s Step Up 3D and there is a reason why we haven’t been impressed by any live action efforts in between.  Native 3D makes post conversion look like absolute dog shit.

Step UP 3D’s use of the medium looks great, is crystal clear, and gives life to the picture that you don’t get with 2D.  Take Toy Story 3 for example.  When I saw it in 3D I enjoyed the subtlety of the work and it gave it a little something but I wrote it off as not really essential.  That is until I saw it in 2D a week later and it really felt like the film was missing something this time around.  The 3D gave it just that little something extra that I did miss when it wasn’t there.  Is it essential to see Toy Story 3 in 3D to enjoy the picture?  Obviously no, I cried like a baby both times, but the medium can give that little something extra to the picture.

In Step Up the 3D gave the dance scenes that little something extra I described above and it allows us to focus in the right spots and gives the dance floor a whole new life that you don’t get in 2D.  The film also shows you how not to use 3D, gimmicky Slurpee effects, but when it came to the dancing I thought it really gave the film a little something extra.

What the film did most of all is give me hope that the medium can keep up with live action insanity and I think is going to bring a lot to the films that shoot natively as they are released in the not to distant future.  The days of post conversion are already numbered and as the 3D tech gets cheaper there will be no reason not to shoot natively.  People need to stop denouncing things on knee jerk reactions to obvious knee jerk reactions the studios have taken over the past few months.  In fact, I am confident post conversion haters will most likely be silenced this November when Harry Potter and the Deathly Hollows Pt. 1 is released.  Post conversion can be done really well when given the time to do so, as previous Harry Potter IMAX releases have shown us, and while I think it is a dying form for all new releases the inevitable catalog re-releases of major titles that have been post converted should be really cool.   Titanic and Beauty and the Beast are already on the way and you know Star Wars and LOTR are not too far behind.

Anyways, I know most of you aren’t going to rush out to see Step Up 3D this weekend.  But I just wanted to tell you all about how the quality native 3D on display in this film has re-instilled my waning hope for the format.  I am really looking forward to Tron Legacy this winter and I can’t wait to see what Michael Bay’s Transformers 3 looks like, along with Martin Scorsese’s Hugo Cabret and Rob Marshall’s Pirates of the Caribbean: On Stranger Tides next year.  These films very well might usher in the final blow for 3D at the cinema being for real and I for one am excited for that day.