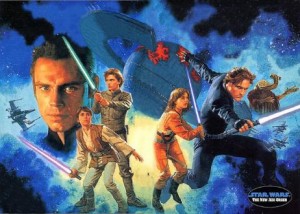 Since the moment audiences witnessed the fall of the Empire in The Return of the Jedi, we have wondered how the Star Wars saga continued. Numerous video games, books, comics, TV shows and other properties have expanded on the core story of a son’s journey to redeem his father and now for the first time since our hearts were broken by the prequel debacle, Star Wars fans have a new hope.

In just a matter of hours, Star Wars fans from around the world have chimed in with their hopes, expectations and fears about bringing this “force” back onto the big screen. Some jaded fans seem to have lost all hope that a new Star Wars film will bring anything but disappointment. Others fear that with Disney at the helm, kid friendly characters such as Jar-Jar Binks and the Ewoks will take center stage.

While those scenarios are certainly possible, I have to believe that a Disney version of Star Wars would be much more in line with their other big budget live-action epics, i.e. The Avengers and Pirates of the Caribbean – neither of which employ gratuitous use of juvenile humor or slap-sticky characters like Jar Jar Binks or the Ewoks.

This acquisition may in fact be the best thing to happen to the Star Wars franchise since The Empire Strikes Back. In terms of preserving film, few studios go to the lengths that Disney does to make sure their fans have the best possible version of the movie for home viewing. The announcement that a “new generation of filmmakers” (plural) leads me to believe that Disney may take the 007 approach in terms of allowing proven, committed directors to take the reins of each film. Imagine a Star Wars film directed by Joss Whedon, Neill Blomkamp or Christopher Nolan. This is a fanboy’s wet dream!

The Star Wars Expanded Universe is so huge that anything is possible. Films could be based on existing titles. Maybe we’ll see a Rogue Squadron series of films, or films based on The Old Republic. What is more likely is that we could be introduced to entirely new experiences. It seems that a large part of the failing of the prequels stemmed in that there was no mystery. We knew Anakin was Luke’s father. We knew Padme ended up dead. We knew how the story ended. But not anymore. The possibilities are endless.

Since 1999 when The Phantom Menace polluted cinemas around the world, Star Wars fans’ dreams of ever experiencing anything remotely similar to the awe and wonder of seeing a Star Wars film for the first time have slowly eroded. This could be the saving grace of those dreams. While these new Star Wars films may not be perfect, at least we know that George Lucas won’t be writing or directing any of them and that alone should give us all a new, New Hope.