Ever since the iPhone came on the market companies have been searching for the “iPhone Killer”. First it was the PalmPre, a nice phone, but didn’t have a chance at slowing the roll of 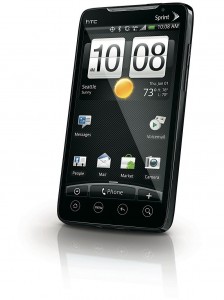 Apple’s iPhone. Lately we’ve seen a number of Android phones flood the market from Motorola, Samsung and HTC. The platform seems to be picking up more steam, and the release of the Droid on Verizon was a highly touted smart phone. Now it seems that we have the most powerful phone of them all, the HTC EVO 4G.

Features of the EVO 4G:

This phone combined with their new $69,99/month Any Mobile, Anytime w/ Everything Data Plan make me think I’ll be switching to Sprint pretty soon once my contract with Verizon is over.  This looks pretty similar in specs to the Nexus One, with a few improvements. Biggest improvement of them all is adding the WiMAX support which means it has 4G support. Too bad where I live it probably won’t be rolled out for some time.

What do you think of the phone? iPhone Killer? Let us know in the comments!