Six Twists on Romeo and Juliet, In Honor of ‘Warm Bodies’ In Theaters Today! 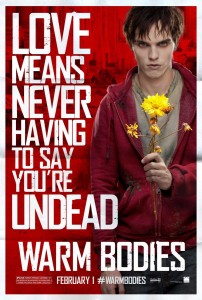 Warm Bodies is in theaters today and its star-crossed lovers (she’s the daughter of the resistance leader/he’s a zombie with an undead heart-of-gold) got me thinking about the original “star-crossed lovers” – Romeo & Juliet. Sure, I could go with the obvious Franco Zeffirelli version… but when I have ever made things easy.

Ok, I do that all the time. But some things are too easy. So instead here are six movies that add their own unique twist to the Shakespeare classic.

Young love, gang warfare and, um…Stephan Sondheim. When you mention movies based on Romeo & Juliet (that aren’t simply a film version of the original) this is probably the first one to come to mind. So let’s get it out of the way, shall we?

West Side Story transplants the story of Romeo & Juliet to the mean streets of New York and swaps the inter-family squabbling for White and Hispanic gangs. That is if by “mean streets” you mean “the Upper West Side”…and if by “gangs” you mean “classically trained ballet dancers”…and if by “Hispanic” you mean “Natalie Wood”.

Ok, it’s easy to make fun of West Side given its hyper-stylized reality. In fact, here’s a great example:

But it posted the highest selling soundtrack of all time (until those whipper-snappers at Saturday Night Fever came along) and spent a whopping 54-weeks at #1. Even if you hate Broadway musicals you can probably still hum at least three songs from this classic. So suck it, haters.

Probably the oddest entry on our list. It’s Romeo & Juliet retold with garden gnomes. Why? I’ve never been able to figure out a reason other than the fact that it allowed them to use a pun in their title. And the only thing kids love more than garden gnomes are puns.

And if you can’t get enough of this idea then brace yourself…Gnomeo & Juliet 2: Sherlock Gnomes is in production.

Can Mad Max: Beyond Thunder-gnome be far behind?