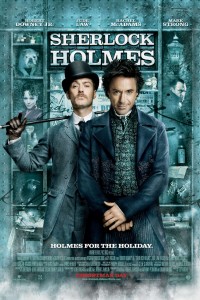 If you’re a Sherlock Holmes purist, then perhaps Sherlock Holmes isn’t for you.  Robert Downey Jr. stars as the famous detective with Jude Law in the role of his faithful sidekick Watson.  Directed by Guy Ritchie, Holmes has been updated for the 21st century (though he still thankfully resides firmly in the 19th century).  Holmes is famous for drawing large conclusions from small observations and that trait remains intact.  But he’s been recast as something of a sophisticated savant being bombarded with information from all quarters.  He’s something of recluse; becoming obsessed with a case or problem and secluding himself until a solution is reached.

As the movie opens, Holmes is unhappy with Watson’s impending nuptials.  He likes having Watson’s level-headedness to himself.  He is one of the only (if not the only) person who can handle Holmes’ eccentricities.  And even that’s just barely as the two bicker like and old married couple.  The rapport between the two is a high point for the film.  Most of the humor is derived from their love/hate relationship and the ensuing dialog.  Unfortunately, they are separated for much of the film and it suffers as a result.  The chemistry between Downey and Law is strong the film drags whenever they are apart.

The mystery, what there is of it, revolves around the imprisoned (and eventually dead) Lord Blackwood (Mark Strong) and his baffling one man killing spree.  The movie takes great pains to always have Holmes explain exactly how he solves the mysteries (both big and small) that he encounters.  But the film is so frenetic it’s hard to determine whether or not his logic withstands the light of day.  Sadly, it’s even harder to play along and attempt to solve the mystery yourself, which was what made Arthur Conan Doyle’s stories so popular in the first place.

Ritchie has refashioned Sherlock Holmes into a whiz-bang adventure movie.  While he’s still solving mysteries, he’s also a man of action.  It can be a disconcerting notion until you see it in use.  Holmes, using his famous deductive reasoning, assesses situations with lightning-fast rapidity.  His prowess is not a result of brute force but rather the ability to instantly spot weakness using his strength of observation.  It’s a clever conceit and one of the movie’s best “updates”.  Downey, as Holmes, keeps his career-rejuvenating hot-streak alive, oozing charm and charisma.  However, the film’s second half is unable to maintain the first half’s slam-bang energy.  The film, not wanting to choose between action and mystery, attempts both but achieves neither.