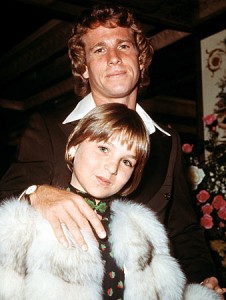 For some reason unbeknown to myself, this story is getting a ton of coverage. I’m even reporting on it… which I am not sure why! But at least you know what people are talking about –

At Farrah Faucet’s funeral some weeks ago, Ryan O’Neal apparently “hit on” his own daughter – Tatum O’Neal. Now I have to say – really? This alleged, and admitted “hitting on” was as much as the following:

According to Ryan O’Neal himself,
“I had just put the casket in the hearse and was watching it drive away, when a beautiful blond woman comes up and embraces me… I said to her, ‘You have a drink on you? You have a car?’ She said, ‘Daddy, it’s me—Tatum!’ I was just trying to be funny with a strange Swedish woman, and it’s my daughter. It’s so sick.”

So he was making a joke – he had NO IDEA who it was!! Big whooptie-do… Oh well. Tatum said, “That’s our relationship in a nutshell… You make of it what you will.”