With WrestleMania 30 less than a week away, it’s time to look at the state of the WWE heading into the SuperBowl of wrestling. 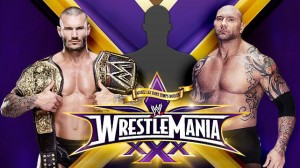 Randy Orton vs. Batista vs. Winner of the Daniel Bryan-Triple H Match.

If Monday night’s Raw was any indication, WWE has done a fine job hyping 3 of the 8 scheduled matches. Unfortunately, that leaves 5 that may bore viewers.

The biggest disappointment this Mania season has to be the Undertake and Brock Lesnar feud. Quite frankly, it’s boring. Lesnar has no momentum behind him, and the Undertake looks old and brittle. To think that 2 or 3 years ago, this match could have been a hot ticket, is a shame. There isn’t anyone on the planet who thinks Lesnar will beat Taker. Why should they? Lesnar hasn’t shown himself as a legit threat to the streak. The only way he could get anything over on the Dead Man was by a sneak attack. I’m holding out hope that this is a brutal and physical match, but I will not be surprised if it’s a stinker.

Does anyone really care about the 30-man Battle Royal? It seems like it’s just filler to get guys into WrestleMania and earn a pay day. Stale characters like Big E and Alberto Del Rio can try as hard as they want to put on a solid match on Raw, but nothing matters unless their characters change. I look for a few surprises in the Battle Royal, but it will ultimately be a snooze-fest.

Bray Wyatt has to be the hottest superstar in the business right now. His promos are classic. If a young wrestler wants to watch how to cut an effective promo, have them watch Wyatt. His in ring talent can no longer be denied either. I look for him and John Cena to have the match of the night. I am hoping Wyatt gets the win, but with Cena, you never know. Wyatt has everything necessary to be the next Undertaker. Mentally, and physically, Wyatt is head and shoulders above just about every superstar on the WWE roster. 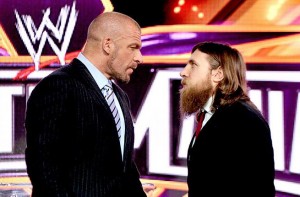 The Daniel Bryan and Authority feud is also top notch. If the WWE is trying to sell subscriptions to the network, this feud, along with the Wyatt/Cena feud will do it. Triple H has made himself look like such an asshole, and he is great at doing that. He plays along with Randy Orton and Batista so well. A few weeks ago, I would have said Daniel Bryan was a lock to beat Hunter, but now I’m not so sure. I would not be surprised one bit if Triple H beats Bryan and inserts himself into the main event. To go a step further, I wouldn’t even have a problem with that, as Triple H would be a great addition to the main event. He would add a layer to the storyline, given the fact that him, Orton, and Batista were all once part of Evolution. I would not mind seeing this main event at Mania one bit.

All in all, WrestleMania just lacks the big time, special feeling that it used to have. It feels rushed and thrown together. I think the company misses The Rock and C.M. Punk dearly. I know that Hulk Hogan is hosting, which is a nice nostalgic feel, but he can’t get in the ring anymore. I’m hoping it’s not a letdown, as I will be in attendance, but I’m not overly optimistic. I know there will be a couple great matches, but the biggest event of the year should be jam packed with star power. WrestleMania 30 is just leaving me with that glass is half empty feeling.