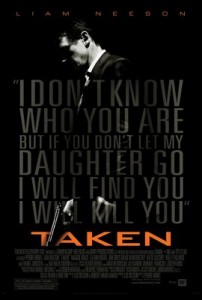 Liam Nesson stars in this fantastic action/thriller that while not paving any new ground is constantly engaging, has great action and one of the more badass lead characters in a film in a while.
Bryan (Liam Nesson) is recently retired special ops of sorts from the U.S. government that has moved out to Los Angeles to make up for lost time with his daughter, Kim (Maggie Grace). Bryan was gone a lot of secret mission, keeping him from his family and eventually losing them to a rich investor and a life he could never provide for them. Kim never resented her dad, and loves to see him every time he is around, but she is also easily distracted by the lifestyle put in front of her at her current status. As Bryan struggles to connect, some old buddies from Bryan’s past stop by for a little reunion and recruit him for a security job for one night only. The job is to protect a pop superstar, Sheerah, in and around her concert and get her safely too and from the venue. After the show, a crowd breaks free and Bryan tries to quickly escort her to safety when a knife armed attacker attempts to attack Sheerah, in which Bryan dispatches with ease, and gets the star safely back to her hotel room. After this ordeal, he then learns that Kim wishes to go to Paris for mini-vacation with her friend Amanda and that they will be staying with her friend’s cousins. Bryan reluctantly agrees, knowing the risks of a girl Kim’s age being in Europe with out supervisions, but eventually gives in. Bryan’s worst fears are realized rather quickly when almost immediately following her arrival, Kim and Amanda are kidnapped and are going to be potentially sold into the sex trade. Kim was on the phone with her Dad when she was taken and her abductor decides to pick up the phone, in which Bryan informs him that he will hunt him down and kill him and our story is put into drive. 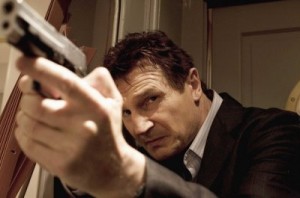 The first thirty minutes of the film might move a bit slow for some people, especially if they are expecting a lot of action, but the opening scenes do a great job of setting up the relationships and characters and give the proceedings much more weight then if they had rushed along the beginning of this story. And if you are getting a little squirmy in your seat, once the girls are taken, the movie never slows down. The action in the film is also top notch with some awesome shoot outs and close quarters combat that is on par with any recent action movie to come out. The film is also filled with plenty of humorous bits and moments, including many devilishly enjoyable beat downs and kills handed out by Nesson in the film. I will say the film may not have the deepest characters or moral dilemma, but there isn’t time for introspective sniveling and self pity when you only have a couple of days before having almost no chance of ever finding your daughter again. The great Luc Besson handed his script over to the very able Pierre Morel who shoots an action picture as good as anyone, though it’s a shame Besson couldn’t have given the pic a go. In fact the only thing that rubbed me the wrong way with the picture was a couple of weird “reliving the scene” moments when Bryan gets to Paris that were a bit redundant, otherwise, I was having a blast.
The film is centered entirely on Nesson, and he carries the pic with ease. Maggie Grace is solid playing the attractive and adorable daughter in peril, but once she is taken, she is a non-factor. Famke Janssen is again kind of stuck in a weird disjointed mothers role and while she does the part justice, you just wish she had more to do, we know she is capable. But Nesson, Nesson is awesome in this flick, a force to be reckoned with and on a tirade that can not be stopped. He is smarter and more skilled then anyone thrown in his way and Nesson makes us believe it in every sense. Nesson handles the action with ease as well, convincingly kicking the shit out of everyone and you can tell he had some excellent trainers on set for the fight scenes and what not.

In the end, Taken is an excellent action thriller that is a joy to watch. It will keep you on the edge of your seat, cheering for the beating of bad guys, and laughing at the brutality of it all. Nesson is great in the ass kicking lead and he will have your confidence the instant he runs through his monologue after his daughter is abducted. One of the best action films of last year (I know it was just release this weekend here, but it was out everywhere else in the world last year) and you will most definitely be seeing this again in my end of year column right before the Oscars this year.
9.25/10