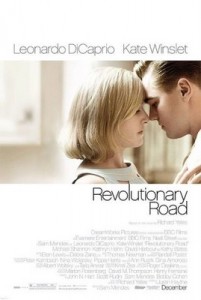 Sam Mendes’ latest is his darkest film yet, but it really gets you to think about ones own life as you can easily see both sides of the argument laid out by the terrific performances by Kate Winslet and Leonardo DiCaprio.
April and Frank hit it off right from the start at a party. Frank (Leonardo DiCaprio) is fresh off the boat while serving a tour in the navy, with dreams of returning to Paris and slowly spending time finding what he wanted to do with his life. April (Kate Winslet) has dreams of being an actress in New York and there chemistry just rips through the screen. Flash forward a number of years and the two now have kids, and on the ride home from a decidedly not so great play April is staring in, the two erupt into a vocally violent assault on one another proclaiming how they are trapped in each others fates and both are clearly unhappy in their situation. Oh how things can change. After the dust settles, April begins reflecting on her past and Frank’s dreams and she discovers they have enough money to move and live off of in Paris for close to a year, and she could get a job at a high paying secretary position that would allow Frank to stay home and figure out what he wants to do with his life. Frank, stuck in a dead end job that he swore he would never do, decides this might be a good idea as well and the two begin planning for the move; and things become great, but that happiness will not last as life is never that easy.
Sam Mendes direction is superb as always, as the film moves right along and he gets amazing work out of his actors. The hate and anger just screams at you through the screen and it is amazing that he and Roger Deakins are able to put together such beautiful imagery that stands out over such tragic scenes. A couple shots just are beautiful and stick with you, while they also capture the tension in the house that just slowly builds and builds in a number of scenes. There were a couple issues I did have with the film though, Winslet’s character could have had a bit more sense, and seems a bit to irrational towards the end, but that very well could be the point, and is one of the talking points of the film as well. Also, their kids are mysteriously absent a lot of the film, and while I am glad they didn’t dip to the “mommy and daddy stop fighting” cliché, they still are just gone with little explanation and it is odd that it is left unexplained; even if it isn’t relevant. Other than that though, there isn’t much to say about the film. 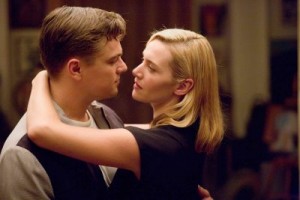 Of the actors in the film, the show is pretty much solely an affair between Winslet and DiCaprio. The two eat up most of the screen time and you won’t find this one complaining one bit. But there is one scene stealer in the film in Michael Shannon who plays a neighborhood friends mentally unstable son, who once used to be a genius but has since become a bit socially abrasive and he gets to show plenty of it in his two brief scenes. He is just perfect as the fidgety, loud, but still smart observer, who is viewed very differently from one scene to another. Shannon is worth the price of admission alone, but you also get two of their generation’s finest actors turning in some of their best work as well. DiCaprio is great as the wishful thinking, but still rational voice in the relationship. You can just see the guilt and grief he deals with in his face, while also his genuine sincerity he has towards April and his family. His emotions are all twisted and he doesn’t know why he is doing what sometimes, and he is sadly an image for many people, who dream but don’t necessarily have the guts to go for what they dream of. DiCaprio when angry in this film is also astonishing and incredibly intense; it is a sight to be seen. Winslet on the other hand handles the fights well, but also is perfect as the dreaming wife, looking for more from her life, and expertly captures April’s slow destruction as she fails to see any hint of rationality and holds on way to tight to her dream. And the final scene between the two is just everlasting in your memory as a simple scene is loaded with so much emotion behind each individual; it truly sums up the tragic nature of the film. 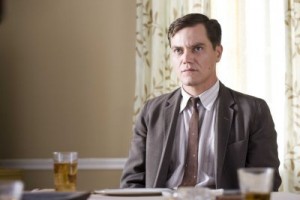 In the end, Revolutionary Road is a fine drama that while supplying a couple of light moments along the way pretty much runs with the sadness and tragedy of the story. Mendes direction is marvelous, and him and Deakins put together one of the prettier films of the year this side of Benjamin Button and Wall-e. The acting is phenomenal, and the film will only grow with time, sadly the film isn’t the kind of movie you rush back to see that often so it might be a while till this film settles itself into as good as it truly is. With that said, you should still check out his film for its amazing performances and a plot that will keep you thinking, about the characters in the film and the life you lead yourself.
8.75/10