Review: My Brother, My Brother and Me “Fancy Takes Flight Tour” Kicks Off in St. Louis 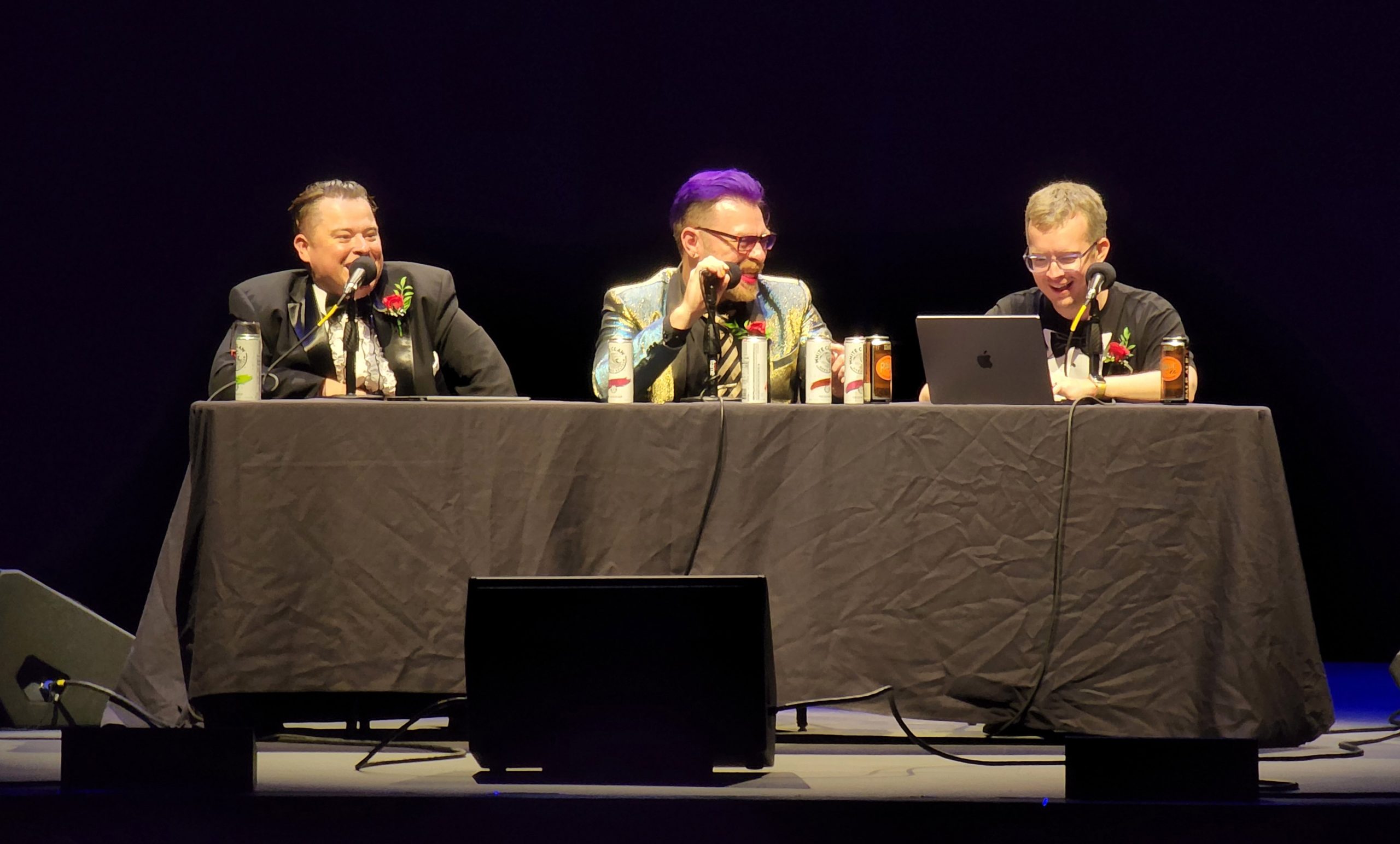 Thousands of fans of the brotherly trio packed the house as My Brother, My Brother and Me (MBMBaM, pronounced like “Ma-bim-bam” by the initiated) recorded a live podcast. Opening the show was an episode of youngest brother Griffin’s podcast Wonderful! that he does with his wife, Rachel McElroy (who happens to be from St. Louis). This marks the first time that the group has performed in over two years since the start of the Pandemic, so it was a special treat for everyone in attendance.

Each show was introduced by the one and only Clint McElroy (father to the boys and a former radio host), who reads the famous disclosure from the podcast during their live performances.

Wonderful! is a show where Rachel and Griffin talk about the things they love, and for this special homecoming episode, they chose to discuss the best things to come out of St. Louis. Topics included Spuds McKenzie, Kindergarten, Clydesdales, and the most popular subject of the show – the Wehrenberg Theaters theme song (if you are from the St. Louis area, the theme immediately started playing your head). Watching as Griffin discovered this mythical piece of art was akin to someone discovering the meaning of life. The entire audience was erupting with laughter and singing along, in a truly magical St. Louis moment.

You can listen to the entire St. Louis episode of Wonderful! here.

After a brief intermission, the “good, good boys” themselves took to the stage, all dressed up with somewhere fancy to be. Justin was dapper in his satin shawl collar tuxedo, ruffled shirt, and bowtie (he joked that the suit store mistook him for someone going to the local prom). Travis arrived in style with his shiny silver suit and purple hair. And Griffin – well, he had on a tuxedo t-shirt (which both Justin and Travis gave him trouble for). But hey, I guess it still counts!

It was clear everyone in the audience was ecstatic to be back at a live show, and the feeling was mutual for the brothers. The hosts answered several questions from the audience that were submitted in advance, and the theatre erupted when it was time for the popular “Munch Squad” segment (“I wanna munch… SQUAD!). Being 4/20, the bit was naturally themed around the munchies. Griffin also worked as hard as he could to get through an article about how to be a foot model without cracking up, but let’s just say it was an unsuccessful success.

There is no doubt as to why MBMBaM is such a popular podcast. The chemistry that these three brothers have while joking and riffing off one another is so genuine, and makes you feel like you are an honorary member of the family. Going to a live show takes things to a whole new level, and the energy of thousands of fans laughing together can best be described as electric.

Make sure to check out the dates for the 20 Rendezvous Fancy Takes Flight Tour and do not miss the chance to see the brothers when they come to a town near you.