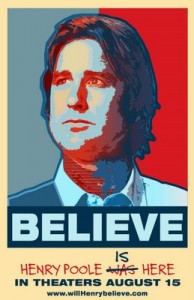 This dramedy about religion, life issue and what it does to people is a fairly uneventful tale, but it holds one interest and has a number of genuine moments throughout.
Henry (Luke Wilson) is a down and out of it and after purchasing a suburban house in California, after he was unable to get the one down the street, he proceeds to put nothing in it outside a couple of pieces of furniture and filling his frig with doughnuts, frozen pizza, and alcohol. Henry spends his days drinking, eating, and lounging in his dark house and backyard with no care for what he is doing or where he is heading. He quickly discovers his neighbors as they both intrude on his yard and life, the first of which to do so is his Hispanic neighbor Esperanza (Adriana Barraza). She comes over as soon as he moves in and you can tell she is the kind of lady that knows everything about everyone on her street. Henry clashes with her in their first encounter, not just because of her assertiveness, but also do to her in the open religious beliefs, as we discover that one thing holding back Henry is probably a beef with god. Immediately following their conversation, Henry begins to hear it again coming from the other side of his fence, to which he finds a young girl, Millie (Morgan Lily), playing the conversation back on a tape recorder. Millie is shy and quiet, but Henry gradually begins to form a bond with her mother Dawn (Radha Mitchell). Henry’s life is quickly further complicated when Esperanza interprets a water stain on the side of Henry’s house to be the face of Christ and when it begins shedding tears of blood, a full on miracle investigation is taken on by the church. Henry is then left to fighting a religious battle, hiding his secrets, and hopefully redeeming his past while he mulls his existence alone in his house. 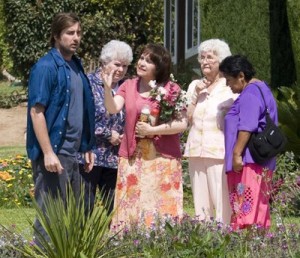 The film itself is solid for sure all around; I just don’t know how memorable overall it is in the end. That’s not to say that the film doesn’t tackle some potentially dangerous topics and issues, in fact I applaud the filmmakers for creating a film that tackles mortality, a destructive childhood, and religious posturing without getting preachy or too heavy in tone. The film stays fairly light and that is one of the stand outs of the picture, that it is easy to watch while also getting you to ponder life and some of its largest hurdles. The film also does a fine job of never boring and balancing drama and comedy, but something just didn’t click in the end. Also of note, the power of the Jesus Christ water stain is given outs for every miraculous thing around it, leaving one to decide whether it’s real or not, but I think this aspect could have been handled more subtly then they do in the end as well.
The actors in the film are also rather good all around with Luke Wilson turning in a solid, if a bit one note performance. Wilson gives Poole layers and a certain bit of mystery to him, which has us guessing as to why he is acting the way he is; and while the subdued nature works most of the time, it also doesn’t feel like he is doing a whole lot at the same time. That said, Wilson has a few classic deadpan laughs and bounces off his co-stars very well. Adriana Barraza is good as well as an overbearing mother figure of sorts as well as serving as the religious core of the film. She and Wilson have a number of funny scenes and she does fine work in a scene that could have gone sappy in a second but she keeps it real. Radha Mitchell is attractive both emotionally and physically on screen and she really sells us on both her relationships to her daughter and Henry in the film. You can buy Henry’s budding confidence in her and also makes you smile at their sweet moments. Morgan Lily also deserves mention for creating a cute yet mysterious girl, as well as accolades for playing a disabled child as well, even if it’s as simple as not speaking; she says much with just her eyes. 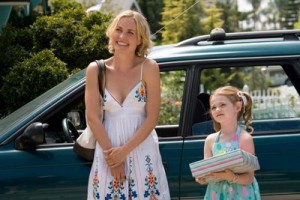 In the end, Henry Poole is Here is a dramedy that works on a number of levels, but for some reason didn’t elevate itself for some reason to being great. I don’t know what was holding it back, the subject matter maybe, but like I said I thought it handled itself well. I can’t put my finger on it, other than it just didn’t click with me. Either way, it’s definitely not a waste of time and is definitely worth your time if you are interested or enjoy any of the actors. Just don’t expect to be blown away or anything.
7.25/10