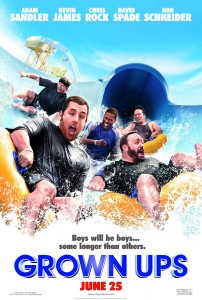 Like “arrow roulette” that we see in the movie, GROWN UPS is joke roulette; some Jokes hit, some miss.

Last week I wrote a review about Toy Story 3 which took me back to my childhood and growing up.  This week I went and saw Grown Ups. I know most of the movie critics will be blasting this movie as lazy, boring, and not funny.  I would have to disagree.  Grown Ups was actually really funny, and yet light-hearted enough to maybe bring your kids to if they are over 13. Though the comedy was punchy with testosterone-filled jokes, everyone could really appreciate the humor conjured up by comedic geniuses like Adam Sandler, David Spade, Chris Rock, Kevin James and Rob Schneider.  I personally think they gave the guys a scene and sat them down, and the guys just made jokes.

Grown Ups Centers around five friends and their families gather to mourn their youth basketball coach passing and retreat to their old New England campground for a weekend.  The five friends played by the cast listed above come together after 30 years, some with families, some with great jobs, some with no jobs, and even one who is a new age hippy.

Yes some of the jokes are bad and don’t go over well, but the majority of the jokes are funny.  The story line is family oriented.  Sandler who is a successful agent in Hollywood, has three kids that don’t really know how to have fun without the modern day technology.  (Reminds me of my kid and some of her friends)   Not only does Sandler get to convey his rearing to his kids they finally get it.

I enjoyed this flick I could actually put one of my current friends in each of the roles.  I think a lot of the situations would actually happen if my buddies and I went camping for a weekend.

To wrap it up I would go see this flick again, and I think if you are a Grown Up male this is actually a flick you will enjoy.  If you have a sense of humor you will enjoy this film.  Yes as I stated earlier some of the jokes miss the target, or they just over do the same joke (breast feeding a 4 year old), but in the end it is a flick you will enjoy and conveys a message to all of us who have grown up in the last 30 years.  Whatever happened to kids exploring the woods, playing basketball, or just hanging out with buddies.

I would grade this movie a B to a B-.  Not Awesome but it does have a lot of laughs.  Men after Seeing Toy Story 3 with your Kids, Go see Grown Ups with your buddies I am sure there are situations you will relate too.