Theatre Review: Forest Park is Alive With THE SOUND OF MUSIC! 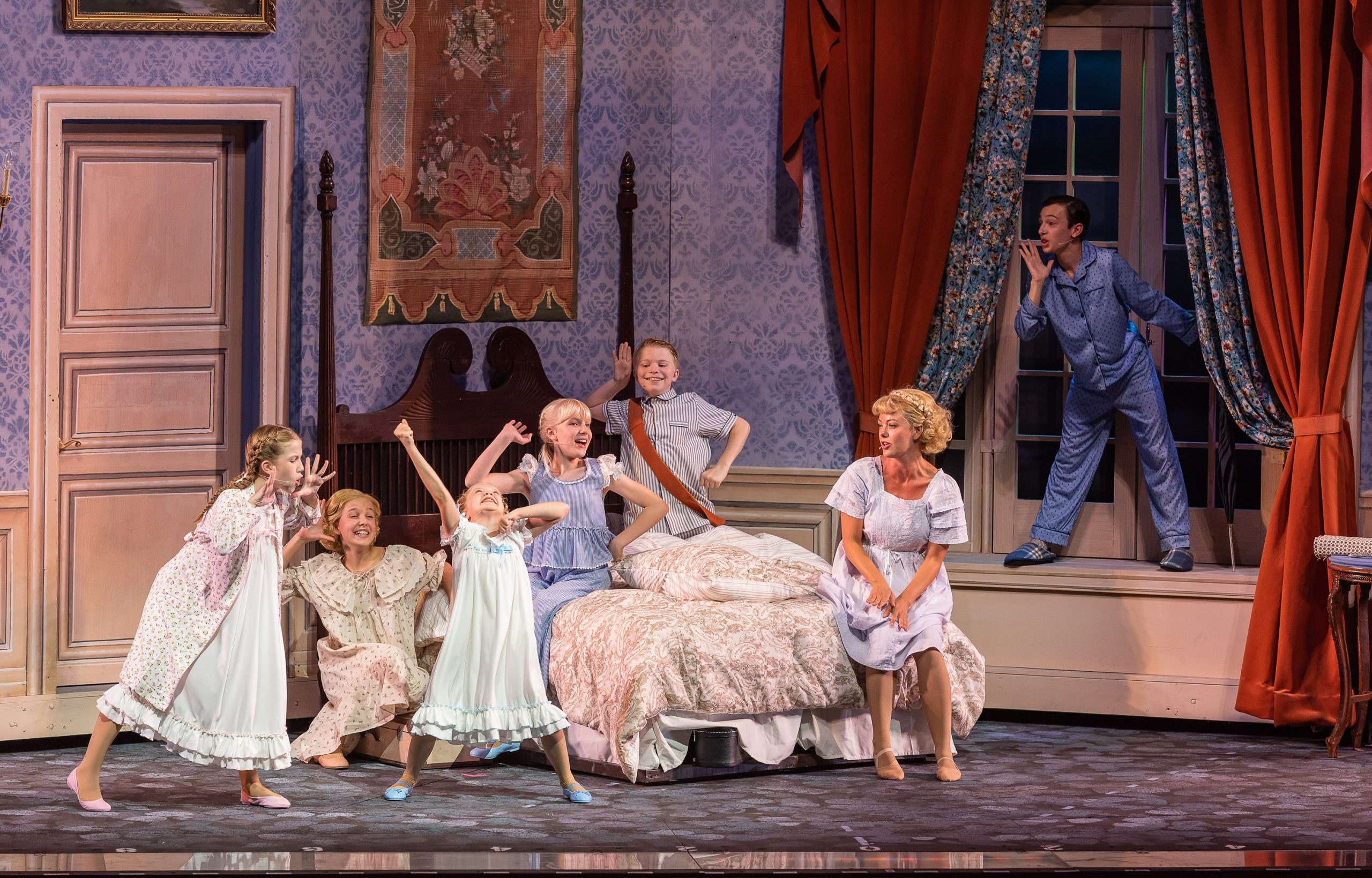 The second show of The Muny’s 103rd season is an absolutely delightful production of Rodgers and Hammerstein’s timeless classic, The Sound of Music.

With performances through August 9, audiences will experience the pure joy of one of the greatest musicals of all time. It’s hard to stop yourself from singing along with all the favorites during the wonderful performance – from the titular opening number, to “Do-Re-Mi” and “My Favorite Things,” the list goes on and on with the beloved songs you never want to end.

Kate Rockwell stars as the lovable Maria Rainer, a postulant of Nonnberg Abbey in Salzburg, Austria who is tasked with becoming governess to the Von Trapp children – Liesl (Elizabeth Teeter), Friedrich (Victor de Paula Rocha), Louisa (Amelie Lock), Kurt (Parker Dzuba), Brigitta (Jillian Depke), Marta (Abby Hogan), and Gretl (Kate Scarlett Kappel). With no prior experience, Maria finds herself at odds with the family’s patriarch – Captain Georg von Trapp (Michael Hayden) – but it doesn’t take long to figure out just how special she is. All this is set against the backdrop of World War II, with fears of The Third Reich’s annexation of Austria into Nazi Germany.

There’s no mystery as to why the show has remained so beloved since it opened on Broadway in 1959, followed by the wonderful film in 1965 starring Julie Andrews. The music of Rodgers and Hammerstein, conducted here beautifully by Music Director Ben Whiteley, is unforgettable. From the moment Rockwell belts out those first few notes, the audience has already been won over. Every number is hypnotic, performed by this wonderful cast. And the story has everything – adventure, romance, comedy – it runs the gamut of emotions.

The role of Maria is iconic, and Rockwell does a fabulous job with the task she is entrusted with. The actor is charming, charismatic, and most importantly – endlessly likable. Her portrayal of Maria’s positivity, courage, and endless supply of joy is awe-inspiring. She’s a natural, and perfectly cast to play the part. Her singing is lovely from start to finish, and really captures the spirit of the character we have cherished for more than sixty years.

Hayden quickly establishes that Captain von Trapp is not one to put up with any nonsense, doing a great job playing things close to the vest at the beginning of the show. But as things progress, you see the character opening up – and the actor does a terrific job bringing that change to life. Once Maria brings music back into his life, you notice his body language changes and the way he delivers lines with more and more happiness. Hayden does a nice job through his nuanced portrayal. He and Rockwell have nice chemistry on-stage as well, which is important for such a cherished romance.

The cast of children is wonderful in the show, really pushing the envelope of what these already talented characters are able to do. Beth Crandall’s choreography feels familiar, yet fresh – polishing up already shiny numbers like “Do-Re-Me,” “Sixteen Going On Seventeen,” and “So Long, Farewell.” The way all of these talented young actors come together and work in unison is impressive, and an absolute delight. It’s hard not to grin ear-to-ear when they are performing these numbers. Elizabeth Teeter, who plays Liesl, is returning to The Muny from roles on and off-Broadway after performing in the show as one of the von Trapp children 11 years ago. She does great work as the eldest daughter who is trying to navigate her life as a young adult.

Bryonha Marie Parham plays The Mother Abbess with her powerful range and delivers a compassionate performance opposite Rockwell. Andrea Jones-Sojola, Leah Berry, Beth Kirkpatrick, and all the sisters played by the ensemble sound great in the show.

Jenny Powers and John Scherer make for a lovable and hilarious duo as Elsa Schraeder and Max Detweiler. Much of the comedic relief comes from these characters, who you can’t help but love despite their high-class and aristocratic antics. One of my favorite parts of the musical, which is sadly missing from the film, is that Max and Elsa sing together. I love the number “How Can Love Survive?,” and Powers and Scherer are delightful together.

Director Matt Kunkel has ensured that everything we love about The Sound of Music stays true, never compromising the show’s vision – while keeping things feeling fresh at the same time. The show is truly timeless, and some parts feel more relevant than ever. Kunkel does a great job at balancing the delightful elements that make up a majority of the show with the underlying conflict that looms large in the background. Even knowing how the story goes, the tension is palpable in the scenes with the German officers.

The creative team behind the show has worked their magic to craft a wonderful experience for audiences visiting Forest Park. Paige Hathaway’s beautiful scenic design transports us to the beautiful hillside of Austria, and makes us feel right at home with the von Trapp family. Costumes by Tristan Raines feel authentic to the period and dazzle throughout the evening – paired with wigs by Kaitie Adams. Shelby Loera (Lighting Design), John Shivers and David Patridge (Sound Design), and Caite Hevner (Video Design) lend their talents for a joyous experience, beginning to end.

What more can be said about such a magnificent musical? The Muny continues to stage world-class productions of the greatest shows ever made, helping to keep St. Louis at the forefront of artistic talent. Audiences are sure to be delighted by the story and songs they love, and newcomers will leave wanting to devour every cast recording and film version they can find. “The hills are alive, with the sound of music!”

The Sound of Music runs through August 9 at The Muny. For tickets and more information, visit muny.org.