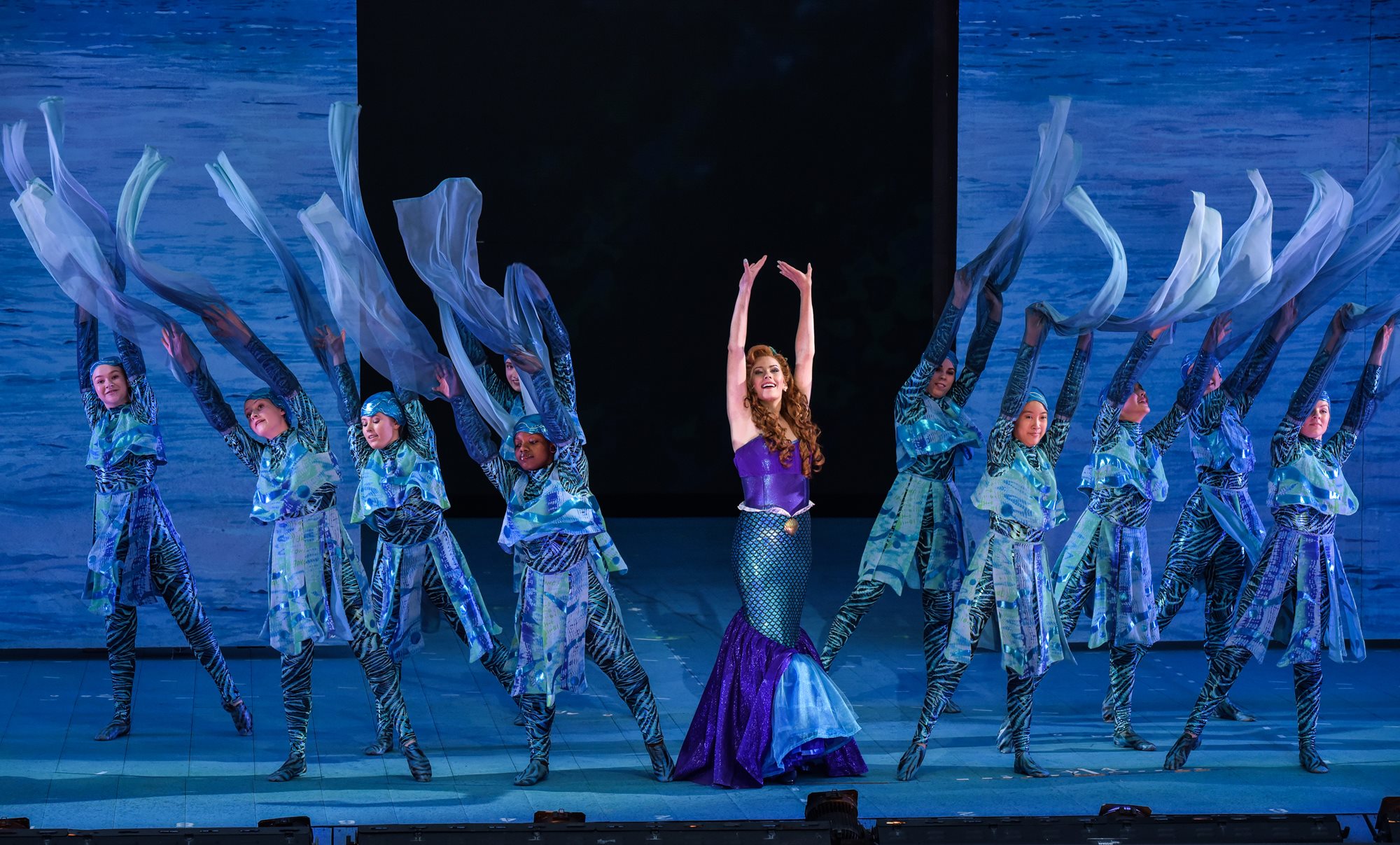 The Little Mermaid will always hold a special place in my heart. It was the first movie I saw in theaters, back in 1989, and my love of Disney has only grown since then. Getting a chance to see one of the classics brought to life is always exciting, especially when it’s a show full of the magnificent songs of Howard Ashman and Alan Menken.

The second show of The Muny’s 99th season is the story of Ariel (Emma Degerstedt), a mermaid and daughter of King Triton (son of Poseidon and ruler of the seas) who is fascinated with the human world. Disobeying her father (Jerry Dixon), Ariel frequently goes to he surface to observe humans and collect the belongings they leave behind. It’s a fairly safe infatuation until she rescues a sailor named Eric (Jason Gotay), who happens to be the future ruler of his Kingdom. Meanwhile Triton’s evil sister, the “sea witch” named Ursula (Emily Skinner), devises a plan to take back the Kingdom she feels was stolen from her. In exchange for giving Ariel legs to walk upon the land, Ursula takes her voice and gives her three days to win over the Prince. If she is unsuccessful, the mermaid will be doomed to live an eternity as one of the sea witch’s “Poor Unfortunate Souls.”

The massive stage of The Muny is an incredible sight to behold, with its frequently changing scenic design. This time around it has been transformed to an underwater kingdom by Michael Schweikardt, as well as an ocean backdrop near the shore, a palace, and Ursula’s lair. The production also includes a giant ship set piece with a staircase on either side for the characters to walk, run, and dance up and down on. The production makes use of a large video screen in the background, as well as a tall screen either side, to help set the scene. All of the design was extremely well done, and very clever with the video interactions. Another nice touch was the large, rotating stage in the center – used to simulate ships, boats, and characters moving naturally with the water. 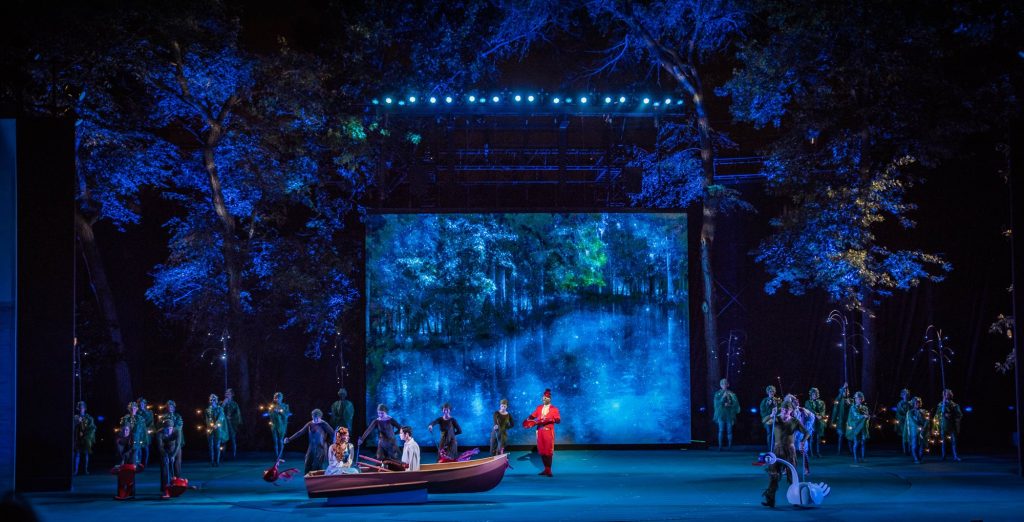 When you think of the animated film, one of the first things that comes to mind might be all of the colorful characters. So if you want to bring them to life, you need great costumes. And that would be an understatement for this production. Robin McGee’s fantastic designs transform the 2D world we’ve grown up with into a marvelous real-world version that is sure to delight. The audience was roaring with applause as their favorite characters appeared on-stage. From the colorful mermaids to the jaw-dropping Ursula (whose giant tentacles take four actors to control), the costumes are breathtaking. Sebastian’s shiny red suit and tiny top hat, as well as all of the background fish, were among my favorites. The production even manages to effectively turn water into a character, played by several members of the ensemble.

The casting for the show was spot on, starting with Emma Degerstedt as Ariel. The actress has several film and television credits, along with theatre – including Elle Woods in six different productions of Legally Blonde (one of the most pleasantly surprising shows I’ve seen in recent years).  Degerstedt is wonderful as the fish out of water, and has a beautiful voice which resonated throughout the packed theatre. On a side note, if Disney ever produces a stage version of the 2007 film Enchanted (Starring Amy Adams), here is your lead. She captured all of the qualities of Ariel perfectly – and most importantly, the magnificent voice.

The Little Mermaid, while of course being an adaptation of a Hans Christian Andersen fairy tale, is most famously known as a Disney animated film. And that often means characters that are larger than life. Two of the standouts in the show who brilliantly bring their characters to life are Jerry Dixon as Triton, and Emily Skinner as Ursula. It would be easy for either of these walking cartoon characters to not be taken seriously in the real world. Yet both actors with their fantastic voices and acting abilities are at the top of their respective games. Dixon is intimidating yet sweet, in a big teddy bear kind of way (as he should be) while Ursula is manipulative and pure evil. Bravo to both for embodying these roles with finesse. 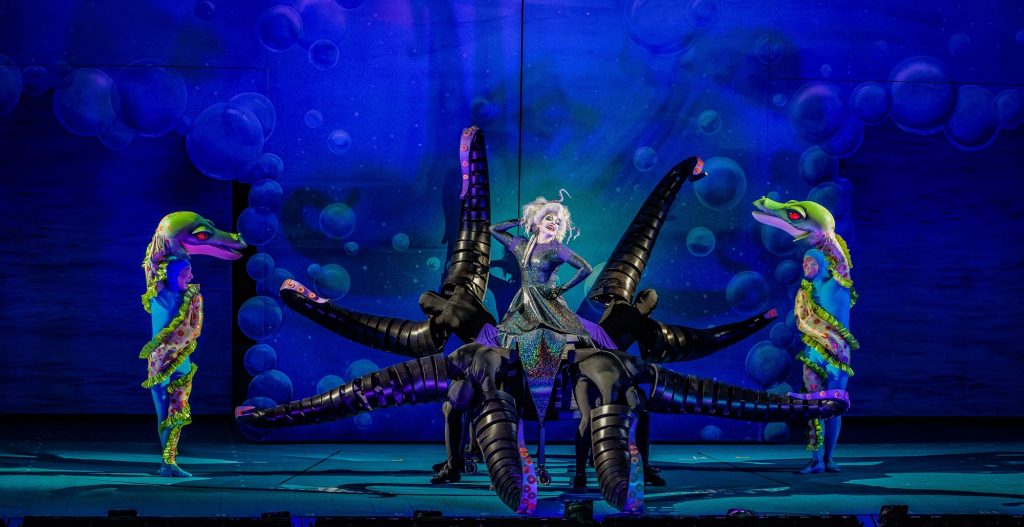 I’d be remiss if I didn’t mention the fantastic voices of Will Porter and Kevin Zak as Jetsam and Flotsam, Ursula’s two eel henchmen. Not only did they get the creepy voices down to a t, but their vocals were quite impressive.

James T. Lane as Sebastian was a personal favorite of mine, bringing much of the humor the show. The actor has an undeniable energy that he turns on and never lets go of for the entire show. Lane’s never-ending charm and sensational voice are sure to please and entertain throughout the evening. The biggest number of the production is without a doubt “Under the Sea,” where upwards of seventy actors are on-stage at once in their incredible costumes. Kudos to the actor for his lead on the song, in a quite impressive display of talents.

Director Marcia Milgrom Dodge skillfully brings this animated tale to life for the entire family to enjoy this summer at the beautiful Muny. Musical director Charlie Alterman leads the orchestra as they skillfully do justice to the classic music of Ashman and Menken. With the timeless story, beautiful set design and costumes, marvelous choreography by Josh Walden, and fantastic performances, you won’t want to miss the chance to be a part of this world.

The Little Mermaid is playing now through June 29 at The Muny in Forest Park. Visit TheMuny.org for more information, or MetroTix.com for tickets.