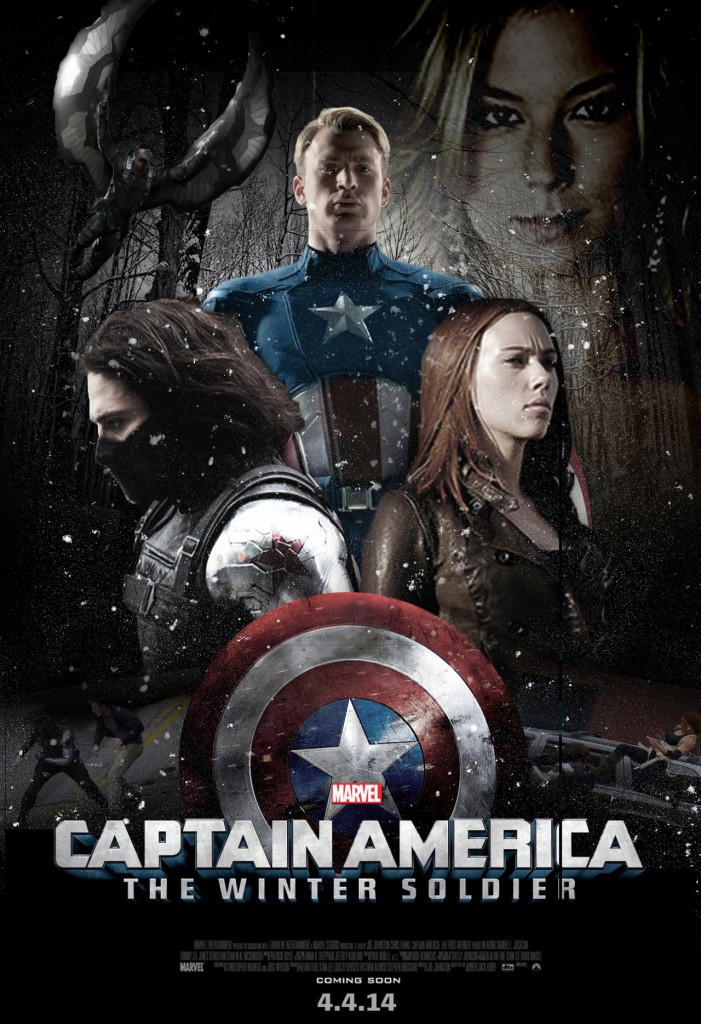 Kicking off this year’s set of superhero movies is none other than Captain America: The Winter Soldier. Serving as the direct sequel (obviously) to Captain America: The First Avenger, and the third movie in the set of phase 2 movies (phase 2 referring to Marvel Studios movies that take place after the Avengers) one is left to wonder what it will bring to the table as far as shaping the oncoming entries of the Marvel cinematic Universe. The film is under the direction of the Russo Brothers; Joe, and Anthony who had a previous reputation of directing the likes of You, Me, and Dupree, Happy Endings, and Community. For those keeping track, most of their directing energies were toward comedies. So, how do they handle one of Marvel’s most beloved heroes?

As far as the story goes, we will stick to the bare bones of it all, as it is only fair to see the film and watch it all unravel. Captain America: The Winter Soldier finds Captain America (Chris Evans)  some couple of years after the events of the Avengers, and has joined S.H.I.E.L.D. This film sets aside time to deal with Cap’s adjustment with the modern world and what he has missed in his absence. As can be be drawn from the trailers, there is a growing tension between Nick Fury (Samuel L. Jackson), and Cap on the philosophy of protecting people with Fury’s quote of “S.H.I.E.L.D. takes the world as it is, not as we’d like it to be”. Unless people have been sleeping under a rock over the past year, it’s easy to draw parallels between S.H.I.E.L.D., and say, the NSA, and the overall advent of exponentially high surveillance. This serves to drive the relevance of the story to obstacles that society deals with today. In his time spent with S.H.I.E.L.D., Black Widow (Scarlett Johanssen) has become something of a co-worker, and a friend, who still has a plethora of her own secrets. Also, Captain America finds a new ally in former military man, Sam Wilson (Anthony Mackie) also known as famed hero “The Falcon” to assist with the growing threat of the Winter Soldier who has something of a boogeyman or ghost-like reputation in the intelligence community.

Lets take a moment to address a criticism that people had with  Captain America’s previous appearances on the big screen; his abilities. The Winter Soldier finally executes the attributes that Steve Rogers, Cap, is known for in the comic books such as his hyper-athleticism, tactics, and martial arts skills. A major critique I had with First Avenger was how much of the action was put into a montage. One would hope to see more of his WWII operations in real time at least and feel more involved in the action. In this film, you witness more of what I liken to Cap delivering all-American ass whoopin’ on some deserving individuals. As a comic fan, or as a casual fan you will get what you asked for in that regard. Tying into the action, would be the use of the visual effects. Rightly assumed, there is use of CGI in The Winter Soldier, however, there is a great use of practical effects and stunts to be complimented by the CGI as opposed to oversaturating its use.

Tonally, the film hits on the right marks. With the inclusion of Robert Redford to the cast (playing S.H.I.E.L.D. senior member, Alexander Pierce) it further sells the movie as a political thriller with his well-renowned career in film. In essence, a Captain America solo-film should be some parts political thriller, and some parts super hero movie. As per usual in Marvel films, The Winter Soldier, is not without its bits of comedy. The comedy is not excessive to the point of eye rolling and leading to taking the movie a lot less seriously than it would deserve. Another point to be made is the Winter Soldier is utilized in a manner that is memorable as a serious threat. Aside from Loki in the  Thor movies, and the Avengers respectively, what other villain in the Marvel Cinematic Universe has been particularly memorable in general?

For the comic book initiated, the film takes it’s title from the comic run of the same name written by Ed Brubaker. Truth be told, The Winter Soldier takes elements from the comics of it’s namesake and another notable Captain America story (without delving into specifics). A comic book based movie does not have to draw  100 percent from the pages to the screen as there is time constraints in translating aspects of a particular storyline, and frankly, sometimes it is nice to just be surprised. The key element here is the execution of the storylines, and in that avenue it most certainly delivers. Comic fans (myself included) are pleased that most of the players involved in the Winter Soldier storyline are present… again bringing up the aforementioned Falcon, as he is to Captain America as War Machine (just say no to calling him ‘Iron Patriot’, but that is a rant for another day) is to Iron Man; a dynamic duo that needs to be seen collaborating together on the big screen. This team-up is aided by the chemistry from Evans’ Cap, and Anthony Mackie’s Falcon.

The question is where does The Winter Soldier  rank among the other films in the Marvel Cinematic Universe? Unflinching, I can say that this film supersedes its predecessor in every way. I’d go on to call it the Terminator 2 effect. One COULD argue that it is the best solo film  in the MCU. Some might say to get off the tracks of the hype train, but it assuredly deserves to be in that conversation. The Russo brothers went on to bring a high-octane entry in the realm of superhero movies that has set the bar for this year. Casual fan, comic fan, espionage fan, there is something for you here.  Oh, and this should go without saying, but you’ll want to stay for the credits.

Captain America: The Winter Soldier is an A+