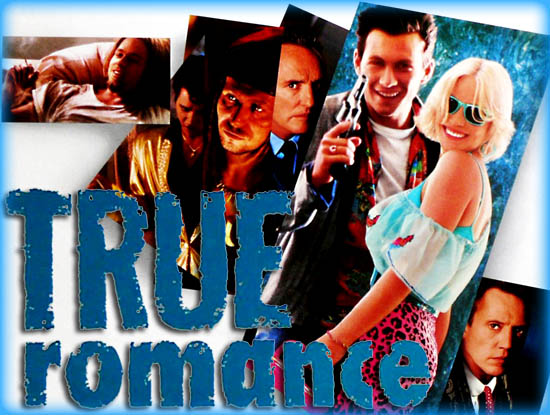 So, 1993 brought just an onslaught of great films. Films like Jurassic Park, Dazed and Confused and Tombstone all cracked The Good Doctor’s Top 25 List of All-Time Favorite Flicks, however, there was one that stood out over all of them. That film was True Romance. The ultra-violent, love story of Clarence and Alabama Worley. Written by some guy named Tarantino, who probably would never amount to much in Hollywood, the film features memorable appearances from Christopher Walken, Dennis Hopper, Michael Rappaport, Val Kilmer, Brad Pitt, and Gary Oldman.

Directed by Tony Scott, the film has developed a cult-like following over the years. Initially, True Romance did not fare well at the box office. This was probably due to how violent the film was. The film was eventually edited down, but the Director’s Cut is the only way to see this gem of a film.

Slater plays Clarence Worley, a geeky comic book shop employee who meets a hooker named Alabama on his birthday. The pair sit through a trio of kung fu movies together before going to get pie and then get it on. Shortly after getting it on, they decide to go get married. You can’t make this stuff up folks! Alabama tells Clarence that her things are at her pimp’s house. The pimp, played by Oldman, thinks he’s part black. The scene where Oldman and Slater face off is nothing short of brilliant. Clarence winds up taking a suitcase which he believes is Alabama’s. Turns out, the suitcase is filled with cocaine.

The pair set out to sell the cocaine in Los Angeles, leaving a trail of bodies and violence behind them. As they make their journey from Detroit to LA, a group of mobsters follows. Perhaps one of the greatest scenes in all of film in 1993, Hopper and Walken exchange words about eggplants. I’m not joking when I say the scene gives me goosebumps. Hopper also can smoke a cigarette better than anyone I’ve ever seen. That scene is probably responsible for me becoming a smoker as a teen.

Slater and Arquette are at the top of their game in the film. In fact, it would be hard to argue either of them were ever better. While they were overshadowed in individual scenes by Walken and Hopper, the pair are perfect for the roles. But, there is one role I have not mentioned yet.

James Gandolfini was relatively unknown at the time of True Romance. Little did we know we were watching one of the most iconic actors in television history. Gandolfini, of course, would go on to play mobster Tony Soprano.

Gandolfini’s scene with Arquette is still one of the hardest scenes in all of film for me to watch. I’m not sure a scene like that would make the cut in today’s ultra-conservative cinema. The two have one of the bloodiest and nastiest fights I can remember seeing in a film. It’s a true work of art. This scene in particular was heavily edited. If you ever watch the director’s cut and the edited version, you will see the difference.

While I give True Romance a 10/10 or an A+, I always wondered how different the film would have been if Tarantino would have directed instead of Scott. It’s long known that Tarantino sold the script to finance his first film, Reservoir Dogs. What’s a shame is Tarantino made only $50,000 for the script. If you watch the newest Blu-ray, there is a special that shows how Scott used Roger Avary to rewrite the ending. Tarantino’s ending was a much darker, depressing fate for Clarence and Alabama.

Another interesting tidbit about the film that a lot of you may not know; the scene between Arquette and Gandolfini was filmed at the same hotel that Bobby Kennedy was assassinated at. In order to prepare for the ultra-violent scene, Gandolfini rented a room in a nearby hotel and didn’t shower for days to prepare for the part. In the scene, Arquette went through several different emotions. In one part, she was supposed to be crying and she couldn’t bring herself to get to that place in her mind for the scene so director Tony Scott smacked her to get her there. It’s hard to imagine that happening today.

While many of the film have left us; Gandolfini tragically passed a few years back of a heart attack, Dennis Hopper has since passed, Chris Penn was lost to drugs, and director Scott took his own life in 2012, True Romance will forever be an example of just how great a film can be even if it’s not celebrated upon release. 27 years later, True Romance is still hailed by many as a cinematic masterpiece, as it should be.