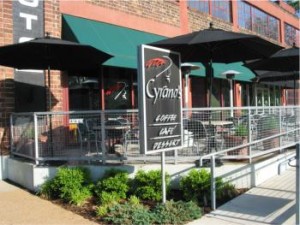 When I ate at Cyrano’s Cafe for lunch it was definitely a change from my usually turkey, cheese and crackers.  The menu is full of snazzy dining options, including various dishes with crab, lobster or shrimp.  You would think a visit here may break the bank, but it’s actually quite reasonable, with prices ranging from $3.25 – $11.50.

Now, before I tell you about all the tasty things I ate, I have to tell you how fun this place looks!  Cyrano’s is decorated randomly, with no real theme except color and light.  The atmosphere is bright and cheery, and includes a bar just asking to be visited.  It was like a 50’s malt shop mixed with an artsy cafe.

Ok, on to the food.  For starters I tried the Crab Cakes and the Rare Seared Tuna.  I wasn’t a huge fan of the tuna, but raw fish can sometimes gross me out.  The other people I dined with seemed to enjoy it, seeing as they ate two pieces each.  I ate it…but it just wasn’t my favorite thing.  The Wasabi Aioli and Asian Vegetable Slaw that the tuna was presented with was pretty good, though.  The Crab Cakes were crab cakes.  I think with this dish it either tastes the same as any other crab cake or it’s awful.  Cyrano’s Crab Cakes were good, but again – just crab cakes, nothing snazzy or gourmet about them.

For lunch I tried something I had never had before.  Now, I absolutely love seafood, it may be my favorite food out there, so I had to try the New England Lobster Roll.  I wasn’t sure what to think, I knew it was served between toasted, buttered bread, but I didn’t know how it would come out.  Think chicken salad but with lobster.  It was in a mayo-based sauce and it was amazing!  Just writing about it right now makes me want one!  There are huge chunks of fresh lobster (or if it isn’t fresh, it sure tasted like it), I mean huge!  I didn’t even need it to be in a sandwich form, I picked out the middle and ate some of the bread with it.

From what I’m told, Cyrano’s is known more for their delectable desserts more so than their regular menu.  Unfortunately, I was too stuffed for dessert, but if it’s really better than that lobster roll, I will need to go back!  If you’re anywhere near Webster Groves during lunch, dinner or even for brunch, you should really stop in and try out some tapas, desserts, sandwiches or more.  And if you’re in the mood for a buzz, the wine, beer and spirits selection is surprisingly large for a cafe.  Visit Cyranos.com for directions, menu offerings and more.