Whoever thought up Thirsty Thursdays for the Rascals Thursday home games ($1 for a 10oz. beer) is a genius.

Whoever thought the Rascals should play a doubleheader on Thursday with free admission, thus clearing up more money for beer…well, that’s just silly.

Taking in my second trip to T.R. Hughes Ballpark this summer, I managed to wrangle in two of my lovely friends from Zeta Tau Alpha, Jackie and Elizabeth, because without dollar beers, I doubt they’d be seen in public with me.

As we settled into our seats on the first base side (I had to sit closest to home so as to prevent an Astros-like incident), I knew it’d be a boisterous night when the girls finished their first two beers after the first half inning.

Jackie: Do the Rascals have any cheers?

Liz: R-A-S…how do you spell Rascals?

Jackie: …how DO you spell Rascals?

The first game was an offensive feast. The Rascals got to Oakland County’s starter Bernard Robert early, tagging him for eight earned runs in two-plus innings. Michael Stephens was the only starter not to get a hit in the game, but he managed to drive in a run. Stephen Holdren crushed two home runs over the Bud Monster in right field, and first baseman Scott Robinson added a solo shot to center field. Zack Sterner went the distance for the Rascals, allowing four runs as the Rascals won 14-4.

Much of the game was spent shuffling back and forth between the beer garden and shaking my head dismally as Jackie and Liz purchased a horn and attempted to figure out how to work it properly. Once they did, I was looking forward to the big bottle of Tylenol in my car. 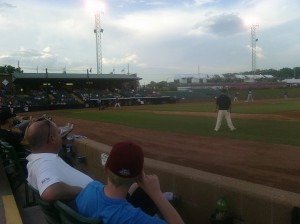 Our seats before the horn was purchased. Pretty sure this guy and his son couldn't get away from us fast enough after.

The trip was another remarkably pleasant experience, aside from a minor incident with two guys behind us who decided to antagonize my fraternity. A few choice words and a nice friendly glare and they went to get beer and never returned from their seats. The weather was warm in the beginning, but the rain had taken the edge off the heat, and as the night progressed, it became more pleasant. The stands were surprisingly empty; considering there was no Cardinals game and the weather was better than it’s been in recent days, I expected more people.

I got the chance to talk to Holdren after the game and asked him about the bombs he cranked. “Well, I knew we were playing a double-header so it would be a short game (in the Frontier League, double-header games last seven innings), so I knew I had to get my hits in early,” he cracked. He went on to explain that he knew the catcher was setting him up inside, so he was able to make the adjustment and pulled the ball. On the season, he’s now hitting .310 with 14 HR and 56 RBI in 74 games.

We didn’t stick around for the second game, but they won that one as well, 1-0. Gary Moran pitched seven shutout innings, striking out eight. The Rascals managed just one hit the second game but made the most of it when Chris McClendon stole third and scored easily on the errant throw by catcher Dan Killian. The Rascals are still 8.5 games out of first, but are 3.5 ahead of the third place team, the Gateway Grizzlies. Since the top two teams in each division make the playoffs, they just need to hold off the Grizzlies until the end of the season to earn a trip to the post-season.

If you haven’t had the chance to go to a game, I strongly urge you to do so. The Rascals have 12 home games remaining, and they’re definitely a good time. I didn’t get a chance to get an epic snow cone this game, but I think we’ll probably go again next week.

Just don’t bring two girls with you if you expect to watch the game in peace.

Liz: Steve, buy me a lightsaber.

me: You don’t need a lightsaber.