RAMS SCALP THE REDSKINS FOR THEIR FIRST HOME WIN IN TWO YEARS!!!! 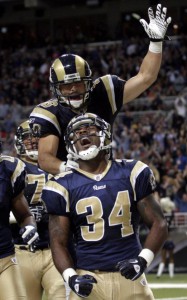 It has been two long years since the fans at the Edward Jones Dome were able to exit the building with a smile on their face and something to enjoy for the next week. That all changed on Sunday afternoon when Sam Bradford, James Laurenitus and the rest of the Rams “scalped Donovan McNabb and the Washington Redskins 30-16. 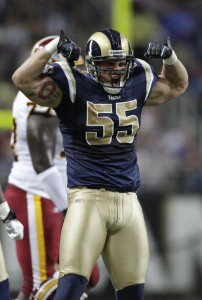 The Rams roared out of the blocks, marching the opening kickoff down the field ending the drive with a 42 touchdown run by Steven jackson! The Rams are up 7-0.

The Redskins came out with Donovan McNabb and Sanata Moss both dialed in and connecting on passes carving up the Ram’s defense. That was until Moss fumbled into the waiting hand os James Butler of the Rams who returned the ball to the Redskin 3 yard line.  Out comes Sam Bradford and the rams offense to put another arrow into the Redskins. Bradford ran a naked bootleg and found tightend Daniel Fells standing in the corner of the endzone for another touchdown!

It’s half way through the first quarter and the Rams are beating the mighty NFC East power Washington redskins 14-0!

Former Rams coach/coordinator Jim Hasslett is the the Redskin defensive coordinator and he dialed up his defense in the second quarter to hold the Rams in check by pressuring Bradford and pushing our offensive line around like rag dolls. They even blocked a chip shot field goal by Josh Brown by pushing their way through the middle of the line and getting to josh just about the same time as the ball! At the end of the first half the Redskins had made a game of it by scoring two field goals and adding a touchdown by Santana Moss. Rams 14 Redskins 13 at half.

The Rams lost more than the momentum at the end of the first half, the lost running back Steven Jackson to a groin injury. 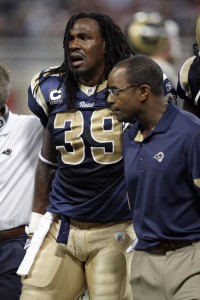 This called for the team to do something we haven’t seen for years, make adjustments for the second half.  Kenneth Darby was called into action to fill in for Jackson, and he responded with 14 carries for 49 yards and a touchdown! The Rams defense also

stepped up pressure on McNabb by blitzing more often. They also suffocated the Redskin running game allowing only 1 yard in the second half after giving up 109 in the first half. The Defense also  recorded another sack on McNabb, recovered a fumble and took away the ball on an interception.

After the Redskins took the second half kickoff down and kicked a go-ahead field goal, something else new happened, the crowd stayed with the Rams! They roared as the Rams took the ball down the field on a 5:24 minute, 12 play drive that resulted in Kenneth Darby’s first Touchdown of the season. I think Phillip Buchanon is still looking for his jock, since Darby faked him right out of it! Josh Brown added another field goal bring the Rams a 24-16 lead after the third quarter.

The final question: Can the Rams finish the game? We have had leads that have disappeard in the final quarter of both of our previous losses this season. Will the Redskins make it an 0-3 start of the season or will the Rams turn a major corner and give us a win? 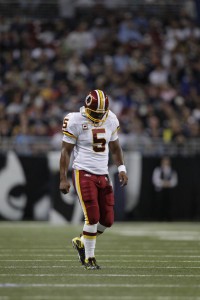 Josh Brown answered the above questions with two more field goals of 29 and 36 yards to give the Rams a 30-16 lead in the fourth quarter with just 2 minutes left in the game!!!!! Last time I checked McNabb didn’t have an “S” on his jersey just the number 5. he attempted to move the Skins down the field only to run out of time in the shadow of the uprights as the clock hit 0:00, and the Rams fans erupted in a deafening roar! WE WIN 30-16!!!!!

This was no fluke and the Redskins didn’t give away the game. This was a step forward for a good football team that is now ready to play with anyone in the league.

Injury Update: Steven Jackson had an MRI today and his groin is just strained and will be evaluated Wednesday, he is listed day-to-day. Safety Oshiomogho Atogwe re-aggravated a thigh injury and is also listed day-to-day. The Ram anticipate the return of DT Clifton Ryan and S Craig Dahl for this Sunday’s game against divisional opponent the Seattle Seahawks.

Yes Seattle is flying into the LOU for what could be a battle for the top spot in the NFC WEST. Ram fans need to come out in force and give them a dose of their own medicine, rock the dome!!!!!! 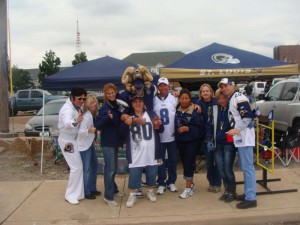 Ram Man will be hanging out at Broadway and Cole tailgating and partying with Seattle’s Hall of Fame fan and fellow PFUFA member Cannonball!!!! Come by and say hi and get a card or picture with the NFL’s ultimate fans!!! Ram Man, Tagalong Toni, Paul, Mona and the rest of the crew were the Farmland Tailgaters of the game!!!!!! 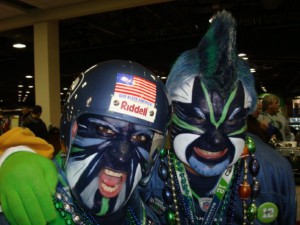 I am Ram Man, still enjoying the sweet taste of victory and as always I will see you in the endzone!!!