RAM’S OFFENSE GETS CAUGHT UP IN A BLACK HOLE!

in a city not so far away……

A group of football players were swallowed up by a black hole as they let yet another winnable game slip away in the second half! 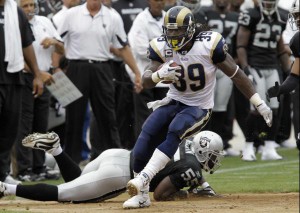 The Rams went into Oakland with the right game plan in mind, “Run the Ball’. Steven Jackson is our teams only weapon and we need to hammer him down the throats of the Raiders. The Rams did this in the first half of Sunday’s game with Jackson having 110 yards from scrimmage combined rushing and receiving. Jackson got us into the Raider redzone and Sam Bradford connected to Mark Clayton for SEVEN!  The Rams went into half with a 7-3 lead. 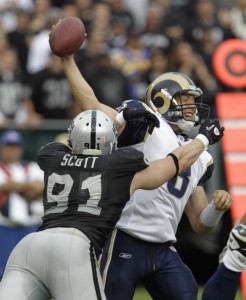 Following the halftime break the Rams offense and Pat Shurmur, our play calling guru some how disappeared in the mysterious “black hole” in Oakland. The third quarter started with the Oakland Raiders getting the ball and a new quarterback calling the signals. Jason Campbell was benched for ineffectiveness, and back-up Bruce Gradkowski was thrown in to see if he could move the offense. He did. The Raiders moved the ball on their next two possessions scoring another field goal and a touchdown pass to Louis Murphy.  Now at the end of the Third quarter the Rams were in a familiar place, trailing. The Raiders were now up 13-7 on the Rams, and Shurmur found his inner Mad Mike Martz, resorting to throwing the ball around. this had the Donnie Jones on the field alot punting the ball away. The Raiders tacked on another field goal bringing the score to 16-7, and the Raiders now have scored 16 unanswered points. 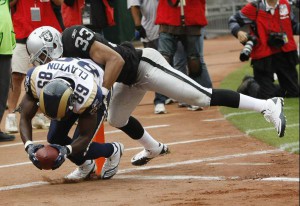 For the second time in two weeks, the Rams were in a position to rally for a comeback win. Late in the fourth quarter the Rams moved the ball down the field in 4 plays of 59 yards and ended with another touchdown to Mark Clayton that is sure to make the ESPN highlights!

The was now 4 minutes left in the game and the Rams only need a field goal to get the first win of the 2010 season. The Rams successfully stop Gradkowski and the Raiders on the next 3 plays and the punting team is coming on the field. Oh wait! There is a flag on the play, Fred Robbins decided to take out his frustration on Gradkowski, shoving him to the ground and giving the Raiders a first down on a fifteen yard personal foul penalty. From that point the seconds ticked away and the Rams timeouts disappeared. When the clock read all zeros, for the second time in a row the Rams fell short and gave away another winnable game losing to the Oakland Raiders 16-14.

I originally said we were going to win 5 or 6 games this season, now my number is shrinking to 2 or 3. Yes the season is only 2 games in and the Rams are competitive in every game they play. (Here comes the but) BUT, this is the easy part of our schedule! Next Sunday we have the Washington Redskins coming into the Edward Jones Dome with Donavan McNabb, Clinton Portis, Santana Moss and a blitz happy Jim Hasslett defense! An 0-3 start to yet another season will have the crowds that chanted “Let’s Go Rams” in the opener, sitting at home watching other games on TV and the Dome empty again.  Sunday is getting to be a must win!

I am Ram Man, and will always support the team and will never miss a game. I will be at the dome on Sunday and I will see you in the endzone!