I get the feeling the women will love this preview the most, and not for my writing. 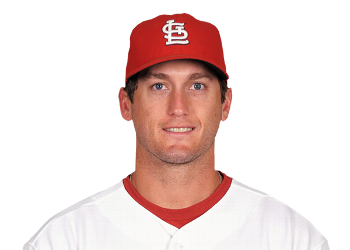 After the trade of Scott Rolen, St. Louis has been clamoring for some stability at third base. Troy Glaus had a good 2008, but he missed almost all of 2009 with an injury and never fully recovered, retiring after 2010 with Atlanta.

Meanwhile, in St. Louis, a whirlwind storm was brewing. Local product David Freese, acquired from San Diego via trade, was tearing up the minor leagues and was deemed ready for a promotion. He was given a chance to start at third, but was constantly harassed by injuries and young single women, and eventually had to be shut down.

He came back in 2011 ready for a breakout campaign, and was by all accounts thriving until a freak inside pitch shattered a bone in his hand. He missed two months while the bone mended, and although his numbers slipped after his return, he still had a solid campaign given the time he missed.

It was the post-season, however, that he would never need a date for as long as he lived in St. Louis. He was a wrecking ball in the NLCS, hitting .545/.600/1.091, cranking three home runs and driving in nine. He was nothing more than mediocre in the World Series until the ninth inning of Game 6, when he worked his magic, cranking a game-tying triple, then the game-winning home run to dead center in the bottom of the 11th. The next night, he drilled a liner into the gap in left and tied the game at 2-2.

With an off-season whirlwind tour, being on late-night shows, handing out awards with Erin Andrews, and perhaps stealing the title of franchise player from Pujols, Freese enters the 2012 season with a firm grasp on the job at third base. 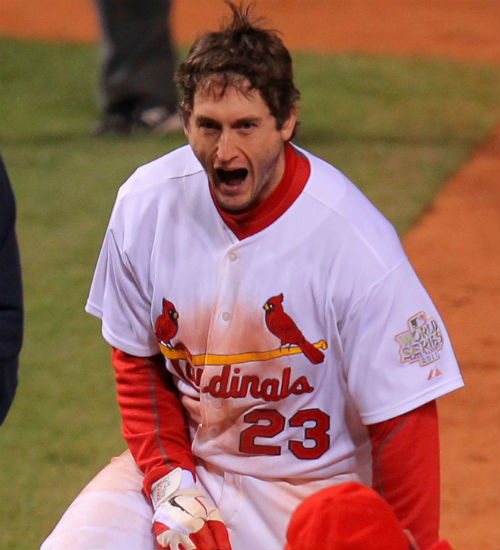 Freese has always had the ability to drive the ball in the minors, and he’s hit well in the three seasons he’s spent as a Cardinal. He isn’t a prodigious home run hitter; rather he has the capability to hit line drives that occasionally go out. It’s not unreasonable to expect him to hit around the .300 mark and possibly up his slugging percentage. Although his slugging percentage is .429, he slugged over .500 in the minors, indicating the ability to hit into the gap. If he can stay healthy, expect 15-20 home runs. 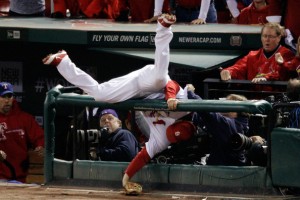 Fielding, on the other hand, is less of a strength for him. He ranks lower than league average in terms of range and fielding percentage. Had he not atoned at the plate, it’s likely fans wouldn’t have forgotten about his flubbed pop fly which allowed Texas to score an unearned run in game 6. Freese can make some acrobatic plays, but he still mishandles some routine grounders, and he hasn’t shown the reflexes to handle sharp line drives the way Cardinals fans became accustomed to while watching Scott Rolen.

Health is the biggest issue for Freese, as production-wise, he’s pretty much in the prime of his career. Ankle problems derailed him in 2010; last year was due to a fluke injury. Nevertheless, he hasn’t played 120 regular season games since 2008, and he isn’t exactly a young guy; at 28, he’ll be looking to secure a long-term contract in the next couple years, and a full 2012 could go a long way in earning one. At any rate, I think Freese is pretty excited to start the new season. 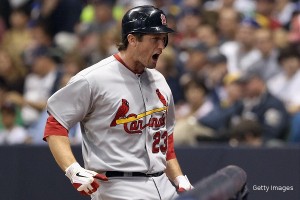 As demonstrated here by his...face. Why, what's it look like to you? (Getty Images)

Daniel Descalso will most likely get starts at third when Freese needs a breather, but if Freese goes down again, look for Carpenter to get the call-up.

Yeah, his major league starts are less than stellar, but that was in a total of 15 at bats. In the minors, he’s hit the ball consistently (career minor league mark of .300/.408/.451) with a bit of gap power (60 doubles and 25 HR combined the past two seasons). Carpenter very nearly earned a spot on the major league roster last spring, and if he has another strong one, he might earn a spot as a bench player. His fielding’s been slightly better than Freese’s, although he did have a bit of a down year last year. Still, he could earn playing time with a strong showing at Jupiter. He’s another player that’s reaching his prime (26 years old), so if Freese can hold up, look for Carpenter to become trade bait.

Again, if you want to chuckle at the name, go ahead. I’ll wait.

Cox was taken 25th overall by the Cardinals in 2010. A third baseman out of the University of Arkansas, Cox was tabbed the best pure hitter in the college ranks. A tweak in his approach led to a lower extra base hit total but much higher average, and for his career at Arkansas, he hit .355/.433/.586 with 22 home runs and 86 RBI in 115 games.

Cox tore through Palm Beach pitching and earned a promotion to Springfield, where he initially struggled, but caught his footing and posted a respectable .293/.355/.432 line with 10 HR and 48 RBI. His fielding is what’s kept him back. Cox switched positions in college, but he hasn’t figured out the nuances of third just yet. His defense slowly improved at Springfield under the tutelage of Pop Warner, and he’s still only 22, so it’s likely he’ll start the season at Springfield to continue working. If he can improve his fielding and keep hitting, he’ll be in Memphis next season, if not earlier.