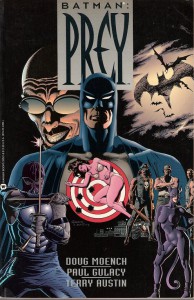 Let’s this start out by saying first and foremost that this is all rumor and speculation….But it sounds pretty good.

Right now I am going crazy with all the news, rumors, and speculation regarding the new Batman film.  But at the same time I am loving it.  I love hearing everyone’s theories on who the next villain could be and where Nolan should take the story.  But have the actual plot details been leaked online already? Maybe.  Probably not.  Plausible.  No way.  All the above?

SCRIPTFLAGS.COM is reporting that they have received word from a “PR contact” that the story of “The Dark Knight Rises” will be largely influenced by the Batman story arc “Prey” by Doug Moench.  “Prey” is about a Gotham City task force assigned by the mayor to bring down Batman.  Dr. Hugo Strange is part of this task force and is obsessed with discovering the true identity of Batman.  Jim Gordon is assigned to the task force but is secretly sabotaging the whole mission.

Sounds pretty good to me.  We know that Batman is on the run after The Dark Knight so it would make sense for there to be a police force trying to hunt him down after Gotham believes he killed their “white knight” Harvey Dent.  We know that Gordon knows the truth and that Batman is a protector of Gotham so Gordon would not actually want to capture him.  And Hugo Strange has been the most talked about villain after Riddler was ruled out.  And where does Tom Hardy come into play?  The task force is led by Sgt. Max Cort who is a little bit of a loose cannon who hates Batman.  Sounds like a good role for Hardy to me.  And is that Catwoman I see on the cover of the book?  Hmmm.

Nolan is known for looking at the Batman comics to influence his films.  It is known that Batman: Year One and The Long Halloween have been big inspirations for Nolan and his team.  But Nolan does not make direct adaptations of these.  So if this rumor is true then look for “Prey” to only inspire parts of the movie rather than be a direct adaptation.

Now let’s look at this realistically.  Why would someone working on currently the most anticipated film in production risk their job just to get the plot online to the fanboys?  Someone who is really stupid because I would assume not many know the details of the actual plot so it would be pretty easy to figure out who leaked this information.  And I would think they would be fired.

Still extremely cool and a great idea if it comes to life.  Check back here for more news on The Dark Knight Rises as it surfaces.

Do you like this idea for the story?  What villain do you want in the film?  Let us know in the comments below.