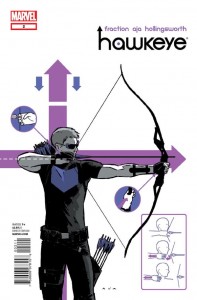 I try not to pick the same book two issues in a row, but dammit if Hawkeye isn’t awesome.  It’s funny, it’s smart, it has heart, and in a world full of make believe heroes, Clint Barton feels real.  He’s The Avengers version of John McClane, and who doesn’t love John McClane?  I’m not up on Hawkeye’s history in the comic world, so I can have a blast reading this book without any hang-ups.

The second issue re-introduces Kate Bishop.  Kate debuted in Young Avengers (basically a female version of Hawkeye).  Going under cover, Barton and Bishop infiltrate a Cirque De Soleil inspired event.  It becomes apparent that The Ringmaster has put on the show to hypnotize patrons and steal their belongings.  The twist is that the people seeing the show are all of the top villains (The Kingpin, Madam Masque, The Owl, Hammerhead and Tombstone).  Long story short, Clint gets caught, Kate makes the save, Barton gets away with the cash, and Clint Barton and Kate Bishop offiically become a team.  This issue gives you a better idea of where the book is headed – Clint & Kate teaming up to take down crime.

One of Fraction’s best qualities is the “human” aspect of his writing.  He has a similar voice on Invincible Iron Man with Tony Stark.  The dialouge in Hawkeye reads smoothly and seamlessly.  The interactions between Kate and Clint were funny and helped move along the story.  Fraction is also able to slip in bits and pieces of Hawkeye’s background within this issue.  I’d really like to see Fraction stick to the “Street Level” characters (Daredevil, The Punisher, Luke Cage etc.)  This is where Fraction is at his best.

There isn’t anything more I can add about David Aja’s art.  This is one of the most beautiful books on the racks.  Aja does things in this issue that are truly masterful.  In one instance during Clint’s inner monologue, the panel goes from color to black and white. It’s very subtle but effective.  A 24 panel page featuring a phone call between Clint and Kate is another example of his extreme talent.   Simple but amazing.

All in all,  Hawkeye does it again.  If the creative team keeps this up, I’m going to be writing about this book once a month, and I’m ok with that.  Marvel just released a second print of the first issue, so grab it if you missed it the first time around.  If you like Greg Rucka’s Punisher or Brian Bendis’s run on Daredevil,  then I think you will enjoy this.  Hawkeye really is the Die Hard of comics, and everyone loves Die Hard.