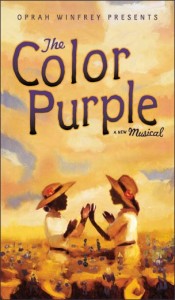 Oprah Winfrey presents THE COLOR PURPLE, a soul-stirring musical based on the classic Pulitzer Prize-winning novel by Alice Walker and the Oscar-nominated film by Steven Spielberg. It is the unforgettable and inspiring story of a woman named Celie, who triumphs over tremendous odds to find joy in life, and her true inner beauty. Nominated for eleven Tony Awards®, THE COLOR PURPLE is a landmark theatrical event. With a joyous Grammy®-nominated score featuring jazz, gospel and blues, THE COLOR PURPLE is capturing the hearts of young and old, and uniting audiences in a celebration of love.

Purchase tickets at Metrotix, or at the Fox Theatre Box Office.

Kenita is ecstatic to be rejoining The Color Purple family!  Training: Eastman School of Music, AMDA.  B’way/Off B’way: Xanadu (Erato/Kira Cover), The Color Purple (Celie), Dessa Rose ( Dessa ), Best of Both Worlds (Rain).  Tours: The Civil War, Ragtime (Sarah) also at Papermill Playhouse, and Cardiff, Wales concert premiere.  Regional: Once on This Island (Timoune), Smokey Joe’s Café (Brenda).  “Thanks to her husband Justin, family & friends, and most of all God for the gift of life and song!”

A native Chicagoan, earned a Tony Award Nomination for her portrayal of Sofia in The Color Purple on Broadway. Her performance also earned her a 2006 Theatre World Award, a Clarence Derwent Award, two Broadway.com Awards and she was a 2006 Drama League honoree.  Felicia has worked throughout the Chicagoland area and has received many Joseph Jefferson Award nominations for her performances in Jammin’ With Pops (Ella Fitzgerald), Hot Mikado (Katisha), Show Boat (Queenie), Ma Rainey’s Black Bottom (Ma Rainey), Ain’t Misbehavin’ (Nell/Amelia) and Dreamgirls (Effie Melody White), to name a few. Felicia’s stellar performance in Chicago’s Drury Lane production of Sophisticated Ladies earned her the Joseph Jefferson Award for Best Actress in a Musical.

returns to the Cadillac Palace Theatre where he performed the role of Mufasa in Julie Taymor’s Broadway production of The Lion King. Mr. Bonds recently won the L.A. Weekly nomination, Best Ensemble, for his work in the Los Angeles premier of Because They Have No Words, directed by Emilie Beck. Bonds received critical acclaim for his portrayal of Jim in the Los Angeles Deaf West production of Big River. He has worked with such greats as Stephen Sondheim in Merrily We Roll Along, William Finn in Romance In Hard Times and Harold Prince in Parade for which Bonds was nominated for both the Drama Desk and the FANY Award. “Through Faith all things are possible.”

is thankful to reprise the role of Harpo after returning from filming the upcoming L.C. Forrest Indie Feature, Epidemic Chronicle.  He earned an NAACP Theatre Award Nomination for his portrayal of Harpo.  He is a native of Atlanta, GA. and a graduate of Morehouse College.  Broadway: RENT (Benjamin Coffin III).  Off-Broadway/Regional: Barnstormer, Once On This Island, Ain’t Misbehavin’ and Cotton Patch Gospel.  Film: Bill Condon’s Dreamgirls; Downtown A Street Tale.  TV: “General Hospital,” “All My Children,” and “Barbershop.”  Stu is putting the finishing touches on his debut album “Love Is” (www.stujames.net ).  He thanks God for abundance and overflow, and his family (Happy 100th Big Mama), friends and Williams Talent Agency for believing in him!!!  “And So It Is!!!

Being part of The Color Purple has been an honor for La Toya London.  She was named the early front runner to win season three of “American Idol” by Simon Cowell, Elton John, and fans.  On-air she joined the ranks of “The Three Divas” alongside Jennifer Hudson and Fantasia Barrino before she was shockingly voted off, coming in fourth place.  La Toya later garnered a Peak Records recording deal and two Billboard-topping singles.Regional/Tours: Handel’s Messiah, Quincy Jones’ Blues In The Night at The Hollywood Bowl, Issues We All Got ‘Em, and Beehive.  www.latoyalondon.com

is thankful and blessed to be part of this experience. Tiffany received her B.S. from Cornell University. Upon graduation she received a full dance scholarship at Hollywood&’s Edge Performing Arts Center.; Regional Theatre: Aida. Other: Los Angeles Laker Girl and CBS’s “Cold Case.” Thanks to mom for constant love and friendship.

is an original cast member of The Color Purple on Broadway. Tours and N.Y.: The Full Monty, Bubbling Brown Sugar, Sophisticated Ladies, Blues in the Night, Ain’t Misbehavin,’ As Thousands Cheer, The Apple Tree and Carmen Jones. Regional: The Color Purple (Atlanta); Play On!, Once on This Island, Barnum, Abyssinia. TV: “Law & Order,” “Third Watch,” “One Life to Live,” etc.  Kimberly also writes and has directed several productions.  “Thanks to family and friends and thank you so much God.” Please visit me at KimberlyAnnHarris.com.

Favorite theater includes: Broadway revival of Equus, the national tour of The Lion King, the European tour of Joey McNeely’s West Side Story, the Kennedy Center’s production of Ragtime, and a concert version of Once On This Island for BCEFA.  Thanks to cesd, Telsey Casting, Mom & Dad, and Mark.

is pleased to rejoin The Color Purple. Broadway: The Color Purple (u/s Squeak). Regional: Tommy (Acid Queen), Hairspray (Dynamite), West Side Story (Consuelo). She is a proud graduate of Harvard University and Washington D.C.’s Duke Ellington School of the Arts. Find out more about Shelby at www.ShelbyBraxtonBrooks.com!

is a proud graduate of Virginia Tech University (B.S. Business Management). Broadway: Dr. Seuss’s How The Grinch Stole Christmas, The Music Man, Marie Christine, Grease, Encores! Broadway Bash 2003. Off-Broadway: Little Ham, From My Hometown. He gives much love to family and friends for all the love and support. “God Bless.”

a Flint, MI native, is honored to be a part of TCP.  After graduating The American Academy of Dramatic Arts she performed with Avenue Q (Las Vegas) and several shows with The Classical Theatre of Harlem.  She thanks God for “Faith and Favor” and her family for their unending love, support, and PRAYERS.

Broadway/Tours: The Lion King, Aida, The Gershwins Fascinating Rhythm, Cats, Miss Saigon, Sarafina and Dreamgirls. TV/Film: “30 rock,” Confessions of a Shopaholic.  Commercials: American Express, Kodak, Pontiac Buick, Mylanta, and Fruitopia.  Upcoming film: Monogamy.  Tim is thrilled to join this company and thanks his family and friends for their love and support.

a Fort Lauderdale, FL, native received his training at USF and on fellowship at the Alvin Ailey School.  Drew has appeared in productions of Nefertiti (Deeply Rooted Productions) and the international tour of Aida (Big League Productions).  He is blessed and honored to make his Broadway debut with The Color Purple!

a Philadelphia native, earned BFA in Dance Education from The University of the Arts.  Company work: principle dancer with The Philadelphia Dance Company (Philadanco). Broadway credit: Hot Feet, cover to and performed the leading role. TV and Film: Bridezilla Promo, Beloved, Podcastgo.com, The Great Observer. Thanks her family, mentors.  “Dreams Do Come True!”

Quotes from the creative team of THE COLOR PURPLE: