This has received a combined score of 8/10 from our two reviewers. 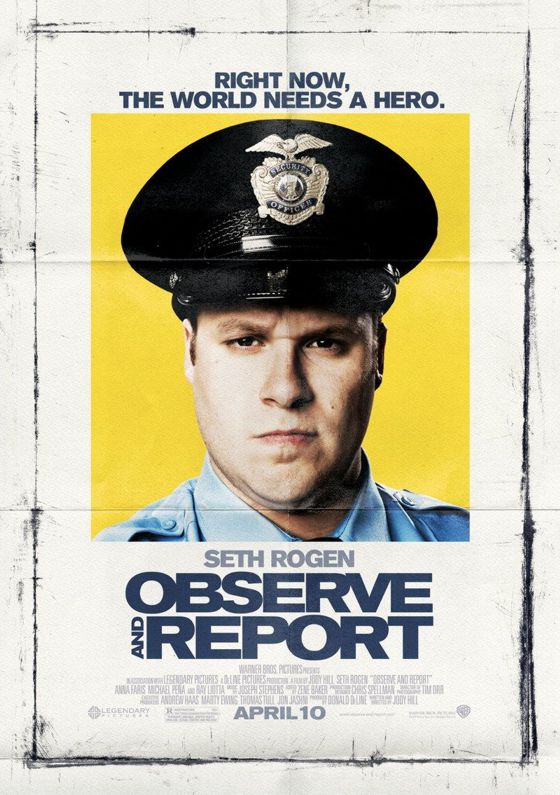 Here is the first thing you need to know about Observe and Report, you WILL be offended. It isn’t an if, there is something in this movie that you will find offensive. Don’t let it turn you off, the movie is very self aware of the choices it makes and it is there to give you a little shock and awe.

Observe and Report is going to catch a lot of slack from people who think this and Paul Blart are the same movie. They couldn’t be more wrong. Sure they both follow a mall cop, but in Observe and Report we see the insanely flawed Ronnie Barnhardt, head of mall security, run amok and generally cause chaos because of his stupidity. Whether it be assuming someone who is foreign is the one involved the the stealing going around in the mall or believing having a security badge makes him god of his domain, the mall.

The story goes like this, a flasher is going around a standard suburban mall flashing women and yelling obscene things at them while doing it. Feeling the area he protects has been defiled Ronnie sets up his team to take down the pervert roaming the mall parking lot. When things aren’t wrapped up right away upper management brings in police involvement. Detective Harrison (Ray Liotta) is brought in to take the case. Ronnie believing himself to be in charge of the investigation immediately starts up a rivalry with the Detective. Things move up a notch when cosmetics girl, Brandi, is flashed by the pervert making the event much more personal for Ronnie, who believes he is in love with the beautiful but bitchy, Brandi.

The performances are what make this movie stand out. Seth Rogen normally known for his every day kind of guy likability, plays a bipolar jerk with no empathy for anyone but himself. He comes off much better in this role than one would think. He appears so self-involved that when food court worker, Nell, who has obvious interest in him compliments him he only talks about the girl who won’t have him, Brandi. His arc is at sometimes heartbreaking and other times frustrating due to his stupidity. There are times when you have to think to yourself that there is no way someone is this stupid. However, Rogen plays the character brilliantly his attempts and buffoonary come of as just another piece of the character.

The supporting cast is who really steals the show. Anna Faris continues to show she has great comedic chops as the bitchy, Brandi. Everyone has known a girl like her, idolized by the male population and never suprised when she gets her way. No matter how much of a bitch she is in the movie you always find yourself laughing at her. On the other side of the coin is newcomer Collette Wolfe who plays the naive and injured Nell. You will want to yell at the screen for Ronnie to realize what he has in front of him. Wolfe, who is cute as a button in this and vaguely looks like Amy Adams, hits the right notes in her short screen time. Considering most of her time is spent prone in a chair makes it even better.

Ray Liotta is always at his best playing a hard ass. Even though he is supposed to be the enemy you find yourself agreeing with him more than your main character. He seems much more sensible and straightforward. It is obvious to anyone who has ever seen a movie with Liotta in it, he needs roles that will let him fly off the handle a bit.

The rest of the cast is good, but pretty much expendable. Everyone gives in pretty solid performances, the only other standout is Celia Weston as Ronnie’s mom. She gets many great lines and probably some of the ones that will be repeated most to friends. Her character makes it obvious why Ronnie turns out just the way he did.

The story lulls a bit here in there, but there is always a moment that will make you perk back up and shock you just a bit. The last ten minutes of the film are especially hilarious and something tells me that there is some stuff in the ending that you just won’t see coming. If you go with friends you’ll find yourself looking at them and mouthing (hopefully) “Did that just happen?”

Overall I give Observe and Report a 7/10. 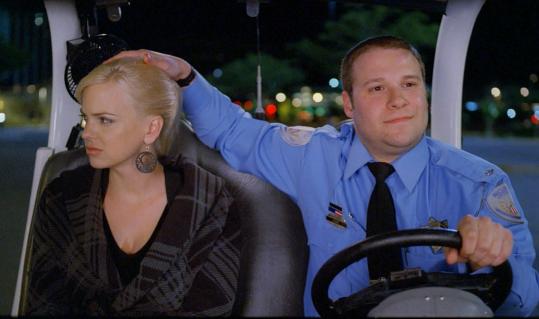 A second take by Zac

Jody Hill’s second feature is an odd, bizarre, yet often hilarious picture that is definitely not for everyone but will definitely win over some of us with dark, dark senses of humor.

Ronnie is head of mall security at Forest Ridge Mall and he is called into action when a flasher begins exposing himself to women in the parking lot of the mall. He takes his efforts to another level when the flasher strikes his crush in the cosmetics department Brandi; who is emotionally but not physically harmed by the incident. Ronnie assembles his team of security which includes Dennis a lisp talking curly haired Mexican, John and Matt a pair of squat Asian decent twins, and fresh recruit Charles who is helping out from his normal job at one of the shops in the store. Ronnie sees himself as a crack detective who is going to break the case and when the real cops, led by Detective Harrison, come into try and crack the flasher case, the two leaders begin to butt heads rather quickly. Added to this mess, an untimely robbery brings the cops into the mall even more, much to Ronnie’s chagrin, which cause Ronnie to begin his pursuit of becoming a real life cop and to prove all of the cops that he isn’t worth a damn wrong. Ronnie also looks to pursue the girl of his eye, Brandi, even though a man of his looks and personality probably doesn’t stand much of a chance.

The film follows a fairly straight forward premise, but makes quite a few diversions into some odd and bizarre territory as it moves along. The character of Ronnie first off is an odd amalgamation of hate, tenderness, and cockiness that pops in and out at random. He is a racist, loves his mother, and is a generally honest guy with his intentions towards women. Ronnie is also not quite the brightest bulb on the block, but he isn’t a slouch either; he even is surprisingly adequate physically when it comes to his athletic prowess. Owe, he is also a medicate bi-polar patient with some not so subtle mental instabilities. Ronnie is one of the more interesting characters I have seen in a while, and the film is more of a character study of him then it is a plot driven comedy, and if you go into the picture knowing that you might be able to connect with the picture more smoothly.

The film will also undoubtedly offend a number of people that see this as well. It isn’t afraid to go anywhere you think it might not go and might even go places you might not have seen a film go before. The tone of the film is also a bit odd in that it has a brief period before the third act that is just sad to a certain extent and through in an off beat and bizarre light night in the mall montage and anybody on the fence with the picture will probably give up. But if you were on board with the crudeness and insanity of it all, just work through the weird patch I just mentioned and you will be rewarded with a fantastic third act that has a fantastic fight scene, hilarious laughs, and a WTF moment that will have you both shocked and laughing at the end; if you have a twisted sense of humor that is.

The bizarreness of the film works because Seth Rogen creates this wonderfully odd character of Ronnie that you don’t think you should like, but some how get behind him in the end. We feel sorry for him one minute, but then when you ask yourself what you would do if you ran into this guy in real life, you would probably be either repulsed, scarred, or just disregard him almost immediately. Rogen is able to fill us with all these mixed emotions and even earns or forgiveness, to a certain extent, in the end for a completely obtuse reaction. The rest of the cast is also quite good with Anna Faris playing the ditz Brandi, which is nothing new, but she does it so well we can’t help but crack up at most everything she does in the picture. Ray Liotta is great as the dickhead, harass, Detective Harrison, and plays the character fairly straight, but still produces some laughs while just bouncing of Rogen to great effect throughout. Lastly worth mentioning is Michael Pena’s Dennis which is just a brilliant, odd, and amazing creation that had me laughing every time he opened his mouth, or just showed up on the screen. Easily the weirdest character in the film, he might be pound for pound the funniest; it’s also nice to see Michael Pena having fun and not playing another cop/soldier or other serious character. In fact, I want to see him do even more comedy now after this; just hilarious. Also, Aziz Ansari continues to be hilarious in everything he does, no matter how big or small a role he has.

In the end, Observe and Report is an odd, weird, yet fascinating character study that happens to include a number of hilarious moments through out. Rogen turns in a great performance that is unlike anything he has kind of been pigeon holed in as of late. Rogen is also supported by a great and hilarious cast that takes full advantage of every scene they get and offers up quite a few one liners across the board. I have been aching to see this flick again since I left the theater, it’s the oddness and bizarreness of it all that makes you want to see it again because you kind of can’t believe what you just saw. Should be in the running for one of the best comedies of the year for some, and completely written off by others, possibly the majority of the people that see it. But if you can jive with the sense of humor it revels in, there is a lot to like here, maybe even love, and I think this one will age well as time goes on for the fans that it will pull in.